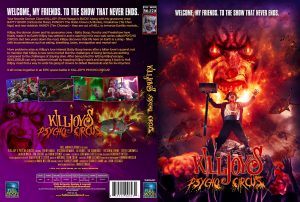 While Full Moon Features’ Puppet Master franchise continues with the upcoming Puppet Master: Axis Termination, the latest instalment of their ‘other’ series, Killjoy, is almost upon us.

Killjoy’s Psycho Circus, the fifth entry in the straight-to-video series that began with 2000’s Killjoy, will hit DVD and Digital on December 1st, and we’ve got the cover art for you right here. The release follows the film’s TV premiere on the El Rey Network on October 30th, where it played as the conclusion to their Killjoy series marathon. 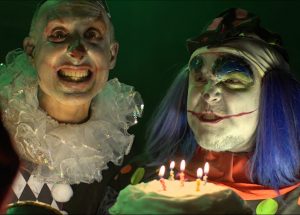 Psycho Circus sees Troma alum Trent Haaga returning to play the demon clown of the title for the fourth time, having taken up the mantle for 2002’s Killjoy 2: Deliverance From Evil. Haaga stars alongside fellow series regulars Victoria Da Mare as Batty Boop, Al Burke as Punchy, Tai Chan Ngo as Freakshow and Stephen Cardwell as Beelzebub, as well as Tim Chizmar as new sidekick Handy. This is the third consecutive Killjoy flick to have been both written and directed by John Lechago, following Killjoy 3 (2010) and 2012’s Killer Clown.

There’s a whole lot of comedic potential in the film’s synopsis. Check it out: 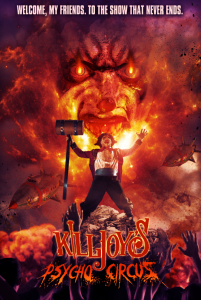 Killjoy, the demon clown and his gruesome crew – Batty Boop, Punchy and Freakshow have finally made it to Earth! Killjoy has settled in and is starring in his own web series called Psycho Circus. But two years down the road, Killjoy discovers that life here on Earth is a drag – filled with inconveniences such as eating, breathing, taxes, immigration and mortal sex!

More problems arise as Killjoy’s love interest Batty Boop leaves after a bitter lover’s quarrel, not to mention that Killjoy is now semi-mortal! But the challenges of being famous are nothing compared to the challenges of staying alive. After being tried for letting Killjoy escape, Beelzebub can only redeem himself by trapping Killjoy’s spirit and bringing it back to Hell. Killjoy must find a way to unite his gang of clowns to defeat Beelzebub and his Six-Psychos!

It all comes together in an epic space-battle in KILLJOY’S PSYCHO CIRCUS!