The Killing of a Sacred Deer Poster Shows Heart

A new poster has been revealed for The Killing of a Sacred Deer; one of our most anticipated films of the year. From director Yorgos Lanthimos, the film has garnered phenomenal critical acclaim on the festival market with many praising the darkness of its themes and within its comedy. If you’ve seen Lanthimos’ previous feature The Lobster, then I’m sure you’ll have an idea of what The Killing of a Sacred Deer might be like. 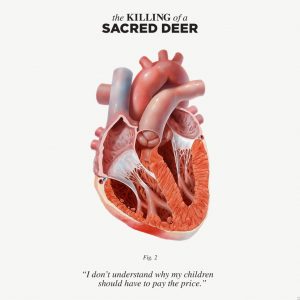 The new poster puts the film’s heart at the centre, but curiously ponders: “I don’t understand why my children have to pay the price.” Pay the price for what? We know that the film follows a surgeon who tries to bring a teenager into his family and everything goes a bit wrong, but what does he have to do to put things right?

Only time will tell. The Killing of a Sacred Deer will be released in the USA on 20th October, before being released in the UK on 3rd November. The film stars Colin Farrell, Nicole Kidman, Alicia Silverstone, Raffey Cassidy and Barry Keoghan.