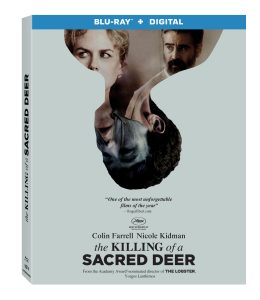 The Killing of a Sacred Deer is one of my favourite films of the year – it’s beautifully dark, criminally funny and purely shocking. From director Yorgos Lanthimos – director of the dark comedy The Lobster – the film follows a surgeon who takes a teen under his wing, with sinister consequences.

The Killing of a Sacred Deer will head to home on DVD and Blu-Ray on 23rd January 2018, so will make for perfect New Year viewing… if you want to start your 2018 in pretty dark fashion.

The film re-teams Lanthimos with The Lobster star Colin Farrell and additionally stars Nicole Kidman, Alicia Silverstone, Raffey Cassidy, Barry Keoghan and Bill Camp. The home release will come with a featurette titled “An Impossible Conundrum”. Be sure to purchase the film in January, so you can learn more about what that dramatic conundrum is and ask yourself: what would you do?