THE KILLING OF AMERICA: Film Review 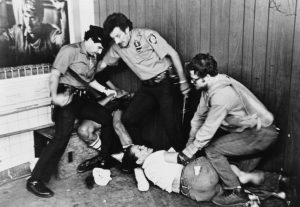 A documentary which follows the moral and social decline of America between the late 1950s and early 1980s.Through archive film footage, newsreels and interviews, it claims to demonstrate that much of the problem lay with the country’s increasingly lax gun laws and an obsession with firearms which continues to this day.

Premiered at FrightFest 2016, the 1981 documentary The Killing of America is a truly disturbing piece of filmmaking. By means of footage depicting real-life American gun crime and murder which it shows in all its often bloody glory, the film throws into focus the social breakdown of a country which to this day still somewhat pompously lays claim to being the ‘greatest country’ on earth.

Never has there been a more timely rerelease for a film than now for The Killing of America, caught as the country has been in a general election unlike any other – the outcome of which its current gun laws are likely to have had some effect on. Filmmakers Sheldon Renan and Leonard Schrader’s controversial documentary shows, with its frequently shocking approach, the far reaching destruction a seemingly unfettered gun culture had – and is still having – on American society.

The result does not make for easy viewing. However its approach is not always helpful. Though in no way trying to make out that it could have been a more ‘pleasant’ experience, but by spending long periods, as it does, focusing on several well known stories, the result drags a little after an initially arresting and hard hitting opening. Once in its stride the film dwells on such incidents as the assassination of the Kennedy brothers during the 1960s, serial killers Ted Bundy and Charles Manson, and the infamous Sidewalk Sniper, Sam Brown. Watching the film to the end however, one can see why Renan and Schrader took this approach, as it shows how the events which shocked not only America but the world, resulted in the catalyst for the start of the country’s disintegration and decline. 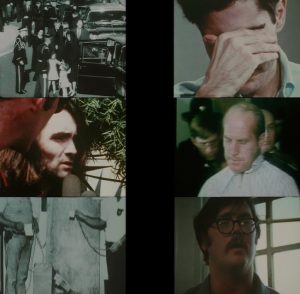 What happens in America, to some degree, eventually effects the rest of the western world, though fortunately the apparent madness of their approach to the rights of ordinary civilians to keep guns has not spread across the Atlantic yet. One of course could claim – like many off the pro-gun lobby in America probably would – that the fear of guns and gun related crimes in their country is stoked by the media and those who oppose the Second Amendment and the constitutional right to bear arms. However when the statistics are there to back up the facts, there can be little denying that lax gun laws and the results of having such free access to firearms is truly disturbing. Statistics which are laid out clearly by Renan and Schrader, such as there being, at the time of the film’s production, an attempted murder every three minutes and a successful one every twenty.

In the years since things have not got better, to the point now that there are an estimated three hundred million guns in America – almost one for every member of the population. Or that since 1968 there have been 1.4 million deaths by firearms – more than the total number of Americans killed since the battles of independence through until the Iraq war. Sobering thoughts indeed and facts which simply reiterate the point that this film should be made required viewing for every adult in America, and anywhere else for that matter. 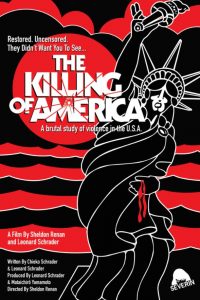 The Killing of America caused controversy in the early 1980s and has never been distributed, televised or sold publicly in the United States. Shocking those who saw it initially with it’s depiction of a country under siege from increasingly violent gun crime, it would likely be both frightening and heartbreaking for the same audiences – as well as those who made the film – to realise that in the interceding thirty five years things appear to have only got worse.

Severin Films’ release of The Killing of America on Blu-ray and DVD comes with several Special Features including audio commentary by director Sheldon Renan, an interview with him called ‘The Madness is Real’, an interview with the film’s editor Lee Percy called ‘Cutting The Killing’, and an interview with Mondo Movie historian Nick Pinkerton. Both editions of the release also come with an extended Japanese version of the film called Violence USA, with an even more extreme twenty minutes of extra footage.