Killer Klowns from Outer Space set to Invade Your TV? 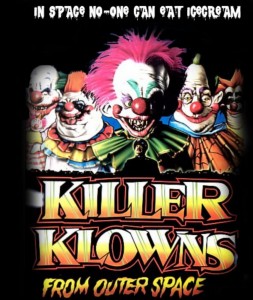 1988’s Killer Klowns from Outer Space is a beloved cult gem of the VHS era, and whispers of a sequel have been circulating on and off for ages. Much as fans would no doubt love to see it happen, I think it’s fair to say that most (including myself) have remained sceptical, treating the rumours as nothing more than that. Something is definitely stirring now though, with word of further campy Klown craziness coming from none other than original director Stephen Chiodo!

Chiodo, who has not directed a feature since Killer Klowns, talked this week to the Movie Crypt Podcast, suggesting that a TV series may be in the works.

“Right now, we are currently pursuing a long arch series for cable. We wondered, should we do a sequel to the first one or do we do a remake? We came up with a ‘requel’ – it’s a sequel and a remake. We’ve 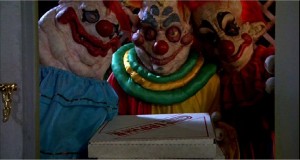 been developing this for a while. It’s a trilogy in four parts, and it really follows the continuing adventures of new people who are experiencing this phenomenon of a Klown invasion, and once in a while you see some of the old guys pop up and hear their stories – find out what happened over the last 25 years. It’s fucking great.”

So there you have it. A long arch series; a ‘requel’; a four-part trilogy. Over on IMDb meanwhile, a page has been created for The Return of the Killer Klowns from Outer Space in 3D, a feature tentatively scheduled for 2018. Well, it was never going to be straight-forward, eh?