Kill The Wicked with this New Trailer for Clean Cut 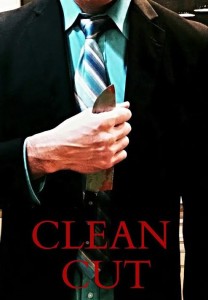 Murder is illegal, but how wrong is it to kill those that truly deserve it? Clean Cut aims to explore the nature of killing and questions whether murder can ever be right. Of course it can’t! If you kill someone you go to jail, end of story.

Clean Cut embraces the spirit of films like American Psycho, Frailty and The Voices, as it shows an unlikely murderer in a guy named Bill Horton. Actually, his decision to kill is not that unexpected as he watched someone murder his mother when he was a child. Nonetheless, he hides behind a facade of normalcy to carry out his crimes, but how long can it last?

Synopsis:
Bill Horton, who at seven years old watched in horror as a serial killer murdered his mother. Known as The Evangelist, he places a bible next to her body and quotes scripture as he leaves Bill alone and destroyed. Thirty years later, Bill has grown up and appears to be a model citizen, spending his days cleaning his house and baking. He has, however, picked up the mantle of the Evangelist, killing those who he finds wicked and evil and leaving a bible by their bodies. Bill only opens up to Dr. Laura Cooper, a psychiatrist, who discovers Bill’s dark secret. She contacts young Detective Edward Legros who is working on the case with his cynical, veteran partner, Detective John Vance. But what Vance knows about the original Evangelist will lead to a bloody showdown.

Clean Cut has already picked up a handful of awards, including Best Horror Feature and Best Actor at the Atlantic City Cinefest, so early buzz around the film is positive. It comes from director Joseph Pepitone (The Jersey Devil, Stuck in the Middle) and stars Keith Collins in the murderous lead.

Check out the trailer below and be sure to keep your eyes out for more on Clean Cut; we’ll let you know when a release date is announced!