Kill or be Killed in the Poster for The Belko Experiment

The Belko Experiment is one of our most anticipated films of the year, because its description of being Office Space meets Battle Royale sounds terrifyingly perfect and it comes from writer-producer James Gunn and director Greg McLean (Wolf Creek). 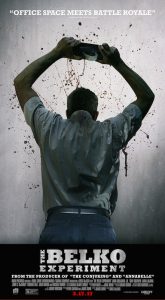 The new poster (right) for the film shows a man using a roll of sellotape as a weapon, which gives you an insight into the barmy violence that the film is set to unleash. The Belko Experiment has an impressive cast that includes Josh Brener, Adria Arjona, Michael Rooker, Sean Gunn, Tony Goldwyn, John C. McGinley, John Gallagher Jr. and heaps more. You can imagine that very few of them will make it to the end alive.

Synopsis:
An American company in South America is mysteriously sealed off at the beginning of a workday, its employees ordered to kill each other or be killed themselves. This starts an escalation of violence, where we discover the true nature of each and every Belko employee.

Check out the action-packed trailer which sees the characters clashing over their rights to kill another human being. What would you do?

The Belko Experiment will be released in the USA on 17th March 2017.