Kill Creek is a haunted house novel that embraces ruminations as well as revenants and revelations. Author Scott Thomas tweaks the traditions of the sub-genre. Instead of a cluster of psychics/occult professionals investigating a domicile of dread, Thomas employs a quartet of horror novelists. The writers agree to be part of a publicity stunt centreing on Finch House, a Kansas dwelling made famous by a book entitled Phantom of the Prairie: a True Supernatural Terror.

The writers each exemplify a cliché bloc of the spectrum of horror fiction. There’s best-selling author Sam McGarver, whose packed lecture halls at the University of Kansas can’t compensate for a diminishing literary output and fragile marriage. T.C. Moore, the lone female author in the group, represents the edgy side of the genre; exalting the co-mingling of pain and pleasure. Her plots mask a private torment. Sebastian Cole is the venerated elder statesmen, now grappling with the all-too-real terror of the onset of dementia. Daniel Slaughter writes for the young adult market. His inspirations are his adolescent daughter and Christian doctrine. Joining the writers are the hotshot internet tycoon who arranges the publicity stunt, and his squeeze, the photographer in charge of documenting the one-night Halloween event.

Little of supernatural interest occurs during the orchestrated gathering, but when those involved are about to leave the premises, news of a personal tragedy sets the stage for imminent terrors. As McGarver observes the intense distress the calamity has caused one of the writers, his thoughts indicate a bitter repudiation of the house’s reputation: “There it was, the house on Kill Creek, the Finch House, the old, grizzled monster that stalked the dreams of children, that danced on the tongues of morbid storytellers. It disgusted him, the sight of this tall tale, this fraud, this fake. They had spent the night in the belly of that bitch and nothing they encountered could compare with the horror they were witnessing at that moment.” McGarver’s agitated reflections prove wrong. Once back in their respective domiciles, the writers become the victims of a pervasive spectral assault. The haunting comes home to roost, forcing the scribes to face repressed fears and to acknowledge the existence of hostile otherworldly manifestations. 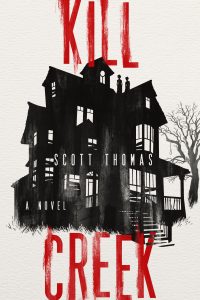 Scott Thomas splendidly creates a fascinating co-dependency between the spooky edifice and the folk that perpetuate (and amplify) its morbid history. And he also shrewdly plays on the analogous symbiotic link between writers and the (quite literally, in this tale) sustaining and obsessive act of writing. Thomas does a fine job with his characters, and the atmosphere is chock full of delightfully unsettling images. However, there is a quibble regarding an aspect of the prose: the author is exceeding fond of similes. The narrative is rife with them. Too many can be tedious. When applied with judicious restraint, similes can work wonderfully, as in this nicely done passage which incorporates two: “But Kill Creek circled the house like a moat, and within this keep, this stronghold of silence, nothing stirred. Only the tallgrass made a sound, swaying even when there was no breeze, its dry husky top bristling like the rattle of a viper.”