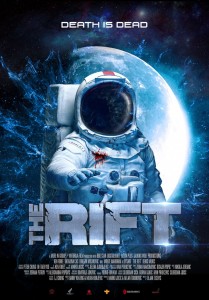 Serbian film (but not A Serbian Film) The Rift not only has a cool poster and one hell of a tagline, but also stars none other than Dawn of The Dead alumnus and man-mountain Ken Foree. Shot entirely in Serbia, it is directed by Dejan Zecevic (The Fourth Man), and is billed as Serbia’s first sci-fi film (although looks to tread equally close to horror).

As well as the very awesome Foree, The Rift also stars fellow American Monte Markham (We Are Still Here), Dragan Micanovic (Killer Mermaid) and Katarina Cas (The Wolf of Wall Street). Also joining the cast, rather surprisingly is Mick Garris, better known for directing a number of Stephen King adaptations (Sleepwalkers, The Stand miniseries, Riding the Bullet, The Shining miniseries), as well as Critters 2.

The Rift’s synopsis reads:
An American military satellite crash lands somewhere in Serbia, and a team of US and Serbian agents are dispatched to secure the remains of the satellite and retrieve the data. But when they locate the crash site, all is not as it seems. The satellite has vanished, and the only clue is a trail leading to an abandoned silk factory nestled on the outskirts of forest line. As the team members begin to investigate, they quickly discover that something else came back from space, something not of this world. As their time runs out, the team must battle the evil forces to unlock the terrifying truth behind the ill-fated mission before the apocalypse begins. Because here death is dead.

The Rift is written by Milan Konjevic and Barry Keating, the team responsible for 2014’s Killer Mermaid. Konjevic also scripted Zone of The Dead, which too starred Ken Foree. The Rift will premiere at Serbia’s Belgrade Film Festival on March 6th.