Keep an Eye Out for New The Cured Poster

Having acquired the film out of last year’s Toronto International Film Festival, IFC Films is putting out the Ellen Page-starring post-apocalyptic drama The Cured in February. Before then, they’ve released this eye-watering poster. 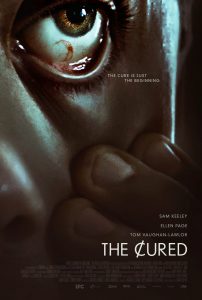 The film, which takes place in the years following the eradication of a zombie-like virus, is the directorial debut of David Freyne, who wrote the script based on his proof-of-concept short The First Wave. It teams indie fave Page with Sam Keeley (Anthropoid, In the Heart of the Sea), Tom Vaughan-Lawlor (Avengers: Infinity War, The Infiltrator), and Paula Malcomson (The Hunger Games series).

Synopsis:
The film unfolds in the aftermath of a devastating virus which transformed the infected into zombie-like monsters. Mankind is struggling to rebuild societies deeply divided between the uninfected and those who did succumb to the virus and are still haunted by their violent actions. In the backdrop, the rise of a terrorist movement threatens to plunge the world into chaos again.

IFC will release The Cured in limited US cinemas and on VOD platforms on February 23rd.