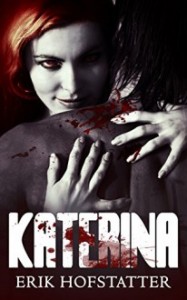 Kamil is a medieval weapons collector and trader based in Prague, he’s lived in his flat for seven years, watched as slowly the hookers and pimps moved into his neighbourhood. He wondered what sort of losers pick up street girls, how desperate for sex the need would be to stoop so low. A young red headed woman catches him off guard and he’s intrigued by her pierced tongue, pretty soon he’s doing exactly what he thought he abhorred most.

So he’s pretty shocked when he wakes up and finds her in his kitchen, ripping a rat apart with her teeth, and rather than steer clear an infatuation is born. Soon he’s following Katerina when maybe that’s the last thing he should be doing.

Katrina is told in first person through the eyes of Kamil, the story is well written, the sexual encounters felt a little awkward with respect to the descriptions and the story left me feeling like there was something missing, maybe it was the abrupt ending but Erik Hofstatter certainly shows talent.