Kate Beckinsale To Enter The Underworld In Fifth Installment 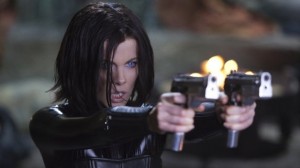 There have been ongoing rumours as to whether or not Kate Beckinsale will actually be starring in the fifth film of the Underworld franchise, but the latest news confirms that she will be donning the vampire look in leather once more.

Beckinsale starred in all four previous films: Underworld, Underworld: Evolution, Underworld: Rise of the Lycans and Underworld: Awakening. The next dose of bloodsucker’s vs werewolves will be directed by Anna Foerster. For Foerster this will be her first debut feature, but she’ll be working under directors such as Rolan Emmerich (Independence Day).

Theo James will star alongside Beckinsdale, and will reprise his character from the fourth film as fellow vampire David. Cory Goodman will write the film and it will focus on a powerful new generation of vampires and werewolves battling a sinister supernatural enemy.