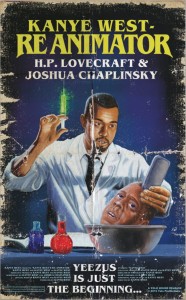 As you can tell from the title and the brilliant cover, this is a mashup of the H.P. Lovecraft short story Herbert West-Reanimator, further popularized by Stuart Gordon’s Re-animator movie. As you might imagine, this is pretty bizarre, but it is dutifully told in the same fashion as the original, from the point of view of Kanye’s best friend, our unnamed narrator.

Kanye is depicted hilariously – self obsessed and bathed in his own radiance. He is a diva ready to throw a fit at the drop of a hat who thinks the world revolves around him. Kanye’s original goal was to reanimate hip-hop music which he saw as having been destroyed by the likes of Hey Ya! from OutKast. Kanye’s music and talent proved so powerful that he discovered he could use it to reanimate the dead. As it turns out, the only way to check a track’s “freshness” is to see its effect when plugged directly into a corpse. The author consistently pokes fun at Kanye, from his toilet habits to his use of auto-tune vocals. It will definitely make you laugh. There is also the ambiguous relationship between Kanye  and our narrator which is constantly hinted at and had me cracking up.

There are lots of jokes about the music industry and popular hip-hop artists both living and dead. One of the major accomplishments of Kanye’s insane musical experiments is bringing Biggie Smalls back to life. We experience many of Kanye’s life events from this skewed perspective: album recordings, the train-wreck marriage to Kim Kardashian that became the abomination known as Kimye, the birth of North West, and confrontations with rival musicians.

The language is a mixture of Lovecraft’s antiquated prose and modern hip-hop language, which provides a great contrast. It’s the kind of thing you expect with the mashup novels that have been in vogue, such as Pride and Prejudice and Zombies, etc., but the urban language mixed in takes this genre in a fun new direction.

What we are presented with is a very tongue in cheek and satirical look at Yeezus. If you think you would enjoy mocking Kanye West for extended periods with some laughs and a bit of horror thrown in, then this is for you. It’s a short read, refreshingly different, with plenty of laughs at Kanye’s expense. As a novella, it’s just the right length to keep it entertaining but not so long as to wear the concept out. As Kanye learns, there is a price to pay for genius and obsession.