Kane Hodder Signs on for Witchula

Having steadily been building an impressive cast for a while now, monster mashup Witchula has just added one of horror’s biggest names to its ranks, in the formidable form of Kane Hodder. 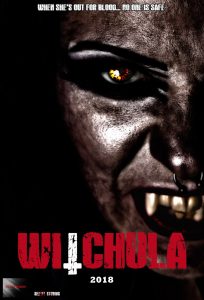 The iconic actor joins a lineup that, as previously announced, features Maria Olsen (Starry Eyes, Southbound, Paranormal Activity 3) as the titular witch/vampire hybrid, Bill Oberst Jr. (Valley of the Sasquatch, Krampus: The Christmas Devil) and The Exorcist’s Eileen Dietz, as well as Marilyn Ghigliotti, who has appeared in a number of horror and sci-fi films in recent years, but will be best remembered to most as Veronica in Kevin Smith’s Clerks.

Witchula’s press release states that Hodder “…not only will act in the film in a role that producer Matt Chassin describes as “pivotal” but also has signed on as Stunt Coordinator.”

The addition of Hodder takes Witchula one step closer to the ‘Expendables of Horror’ label that seemingly innumerable films are currently vying for. Indeed, co-director Pat Kusnadi is quoted in the press release as saying: “This is a thrill for us to have such great talents from iconic horror actors who portrayed iconic horror characters. This is what the worldwide horror fans deserve. They deserve the long-awaited film that can be proudly called the ‘real Expendables of horror.’”

A co-production of US-based MAB Studios and the UK’s Silent Studios, Witchula will be filmed on both sides of the Atlantic, with Kusnadi and Marcus Bradford directing the US scenes and Silent Studios’ Jason Wright shooting in the UK as a “special guest director under the direction of Bradford and Kusnadi.”

Synopsis:
A group of college exchange students travel to a small and remote town situated on an exotic island, only to discover they are being hunted down by a powerful witch-vampire “hybrid” that seeks something in their possession.

Co- director Bradford promises that they are not taking the old ‘Expendables of Horror’ tag lightly, and that we can expect more iconic horror names to be added, saying: “More coming your way, horror fiends!!!”