Synopsis:
Following the death of his father Zaki (Nayef Rashed), college student Salah (Ziad Abaza) takes over his Dad’s role of managing the family kebab shop but finds himself forced to serve Bournemouth’s binge-drinking revellers. Sickened by the acts of drunken depravity on display in the community, Salah suffers a mental snap and starts killing some of his customers, but is then faced with the conundrum of what to do with their dead bodies. 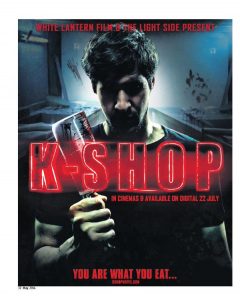 Anyone who has strolled sober through most UK cities on a Friday or Saturday night will have no doubt witnessed the horrors of modern British drinking culture. Booze ravaged clubbers cataleptic in doorways, contorted at bus stops, waking to inhale balloons of nitrous oxide or puke into their shoes while others slur abuse under traffic cones with kebab entrails dangling from their mouths like sagging guts and gizzards. Writer/ Director Dan Pringle utilises the urban nightlife for his twisted spin on the classic Sweeny Todd tale. Replacing pies with kebabs, Pringle delivers a unique, bleak and meaty sliver of social commentary but tragically scuffles the film’s key creative facets. The script is laden with shabby dialogue and makeshift characters alongside some histrionic/ am-dram performances while the mélange of botched death, gunk and torture scenes fail to coalesce into a unifying tale.

From its atmospheric, Saw-like opening follows excruciating, stomach-curdling slayings and scenes of bodily dismemberment that contain the power to turn the most hardened meat lovers into bean eating vegans. Following Salah’s snap, the kills come leisurely. Most are shadow-lit and in the shop basement while others occur under moonlight, but all are augmented by excellent, gut-churning special effects that gore hounds will lap up. While its death scenes are efficiently executed, K-Shop is mired by glaring production and thematic howlers. Pringle tries to hammer home/ directly address the issues of Britain’s binge-drinking culture/ constantly sozzled youth, through the protagonist’s values and dialogue, sermonising what would have worked better if woven as subtext or left open to interpretation. Meanwhile, Ziad Abaza is strained, spurious and lacks sincerity in the lead and is hindered further by some achingly atrocious dialogue which is as angry and synthetic as its delivery.

There is plenty of on-screen hacking, lugging, stabbing and scratching as Salah slaps hunks of body-slop onto the skewered, sizzling elephant leg which turns and burns before the drunken customers like a hypnotist’s spinning wheel. One rowdy punter gets his face submerged in chip fat (deep fried degenerate) while others are aptly hewn, lacerated and frozen for later. But despite writer/ director Pringle’s ability to unravel the gore/ death scenes in a slick and stylish manner, K-Shop remains scare free. Bobbies on the beat turn up to tell Salah there’s nothing they can do about the attack on his father. A local dope smoking, park loitering teen called Malik (Reece Noi) is given a part-time job and an urbane, professional called Sarah (Kristin Atherton) empathises with Salah to the point where she may even encourage the killings should she find out about them. When a former, fictional Big Brother contestant, Jason Brown (Scot Williams), announces he’s opening a club nearby, suggesting greater door-stop degeneracy, Salah’s anxiety amplifies, prompting him to strategise and kill harder. But this subsequent sub-plot and antagonist feel a little too shoe-horned at too late a stage despite some subtle foreshadowing, and Brown is so aggravating, you’d rather he never existed in the first place. 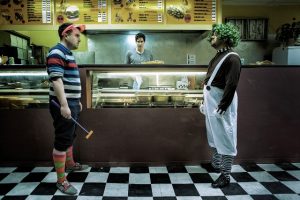 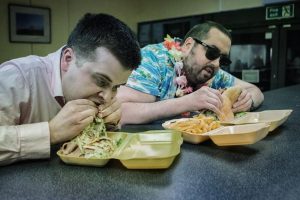 While it’s light on refined drama and affective plot turns then hindered further by an overlong running-time with stock performances and under-developed characters, there are still a variety of altercations that occur in K-shop which make it occasionally, slightly compelling. While it could arguably be interpreted as an ad hoc work of pro-vegetarian propaganda, K-Shop is undoubtedly better in hindsight, but the lack of a strong narrative, plot foundation and convincing performances detracts from the striking visuals and over-stressed social commentary. K-Shop has it’s moments but it is mostly meagre and more in the manner of late 80s/ early 90s British horror comedies like Funny Man and I Bought a Vampire Motorcycle than later British genre features by Neil Marshall and Christopher Smith. Dan Pringle fumbles a nifty concept that probably would have worked better on stage given the limited locations. While his sharp visual style suggests Pringle could be a film-maker worth keeping an eye on, he might be better off working with other people’s material in the meantime and honing his skills as a screenwriter.