Synopsis:
Salah (Ziad Abaza) puts his academic studies on-hold in order to help his father run the family kebab shop, in a seaside town on England’s South Coast.  After his father is killed outside the shop, in a confrontation with some late night customers, Salah finds himself in sole charge of a failing business enterprise, which slowly destroys both him and any hope he had of finding a fulfilling and rewarding life of his own.  As time progresses Salah falls further into monetary and mental troubles, as he struggles to make a going concern of the failing shop.  However, following an after-hours altercation with a customer, an opportunity presents itself which could solve all his woes.  The only question is whether he will be able to live with himself if he continues down the path it leads him on? 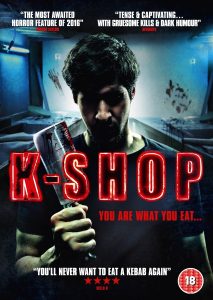 It has to be said – whether your film is mainstream, or whether it comes from a more niche genre such as horror – one of the basic things to get right is the central character: if the person on whom the film’s story hinges can garner sympathy and support from the audience, then half the filmmaker’s battle is won.  If not well, let’s be brutal, you may as well give up.  Fortunately for the character of Salah in the new Brit horror / thriller K-Shop (2016) – the debut feature from writer / director Dan Pringle – the audience’s sympathies are with him 100%.  He may do some things – in fact a lot of things – which are pretty despicable and nauseating on a human level, but, considering the lengths to which he is pushed before embarking on the course of revenge down which he goes, one feels that he is hardly to blame.  Besides almost without exception, his victims are a pretty sickening bunch, deserved of the nasty ends they meet.

Not wishing to detract from the vicious and remarkably graphic nature of the film’s frequent killings – Pringle is certainly not a filmmaker who believes in cutting away when the going gets rough – one could argue that the real horrors here come in the form of the vile and drunken clubbers and druggies who make Salah – and his father’s – lives a misery from the outset.  Right from the start the film recreates a marvellously convincing world of grimy sex, booze and drugs, similar to that which can be found most weekends in towns and cities the length and breadth of Britain.  Its depiction of the people involved in this lifestyle, makes for just as disturbing a viewing experience as any of the film’s more overtly horrific elements.  The visualisation of the seedy environment – though restricted in the main to the confines of Salah’s kebab shop and the immediate surrounding area – also feels impressively authentic, probably due in no small part to the production being filmed on location in Bournemouth on England’s South Coast, where it utilised surreptitious filming of many real-life revellers and party-goers.

However, the star of the show is without doubt Abaza.  His interpretation of the hardening and mental disintegration of the young, idealistic Salah – who’s hopes of a proper career away from his father’s mini fast-food empire, soon crumble as he is pushed to extremes by his degenerate tormentors – is both moving and disturbing to behold.  It’s Abaza’s ability to bring humanity and vulnerability – as well as a steely viciousness later on – to Salah, which elicits sympathy from the viewer for the character and, to a degree, makes you excuse and understand the extremes to which he is pushed.

A subplot of the shady world of drugs and a local clubland boss intent on destroying Salah – who stands between him and his domination of the local nightlife scene – saves the film from becoming just another exercise in slice-’n’-dice schlock.  Even so, K-Shop should appeal to those with a taste for real blood and guts horror – just don’t order a late night takeaway before watching it.