Synopsis:
After a scientist creates a monstrous cross between a barracuda and a pterodactyl all hell breaks loose when it inevitably escapes. In order to stop the chaotic beast, sharktopus is unleashed to put an end to its destruction. 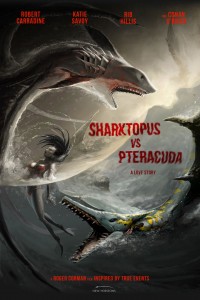 No one is going to watch this film and expect a modern day masterpiece and it would be their mistake to do so. It’s called Sharktopus vs. Pteracuda for goodness sake. This is obviously a hideously bad film, but in the same way that films like Sharknado, Sand Sharks, 3-Headed Shark Attack and Mega Shark vs Mecha Shark – need I go on? – have proven; bad can sometimes be pretty good. Despite the poor writing, acting, special effects and overall premise, there is something undeniably entertaining and watchable about this ridiculously silly sci-fi flick. If you sit back and bask in the film’s high levels of self-awareness, cheap special effects and general refusal to be much more than a cheesy b-movie romp, then you may find yourself surprisingly satisfied with what this offers.

Skarktopus vs Pteracuda wastes no time in getting started – there’s no need to properly introduce the characters or set-up an interesting back story, because all we want to see is Sharktopus battling the Pteracuda, so let’s cut to the chase, literally. Even the characters themselves say, “Now that’s what I’m talking about!” when the two creatures take bites out of each other. The effects are, honestly, atrocious, but it is still entertaining to see a poorly-CGI’ed Sharktopus get pissed off when Pteracuda flies away. It’s a bit of an unfair fight, if you ask me. Tourists and holidaymakers get caught in the crossfire and see their vacations cut short when the Jurassic monsters fight, so prepare yourselves for lots of blood-soaked sea scenes and screaming, as well as dramatic dialogue that draws attention to the film’s tongue-in cheek, playful tone. Warning: this is not to be taken seriously. One guy says, “Don’t worry I’m too handsome to die!” That’s the high level of meta that we’re looking at and it’s god awful, but such fun. 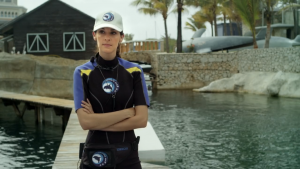 If you dig very deep into its core, you may find a strong environmental message lurking within the watery depths of Sharktopus vs Pteracuda. The newly-grown Sharktopus has a home in an aquarium, but the owner only wants to exploit the creature for monetary rewards and plans to use Sharktopus as the aquarium’s latest tourist attraction. Beneath the film’s preoccupation with ludicrous, cheap spectacle, there is a story about a woman trying to do right by a creature that she has grown to care for. Lorena takes it upon herself to raise Sharktopus in the hope of removing its aggressive behaviours – haha, silly Lorena – and fights to protect the creature from the greedy people around her. If we were to replace Sharktopus with a whale or dolphin, for example, this sub-plot would actually be rather touching. Perhaps the writers intended the film to be a comment on companies like SeaWorld, suggesting that the world needs more people like Lorena and less money-hungry entertainment companies who appear to care very little for their animals. It’s not the most subtle statement, but at least the film’s writers have attempted to add a layer of commentary to prevent the film from being a one-trick pony. 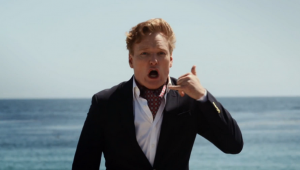 It won’t be winning any awards, it’s certainly not a must-watch and you probably know if you’re going to enjoy it before you’ve read this review, but Sharktopus vs. Pteracuda is, if nothing else, a delightful guilty pleasure.