Many of us might have thought hypothetically about taking revenge on the corrupt bankers who brought the country into a financial crisis at the expense of everyday citizens. With Junkyard Leopard, you get to live out that fantasy through a killer known as The Figure. I’m hoping most readers don’t actually fantasize about inflicting grizzly violence, but hey, we all go a little mad sometimes.

The Figure is quite a distinct sight, clad in leopard print Lycra from head to toe, including over her face, and a white fur coat. She targets rich bankers, lawyers, and corporate leaders who’ve made money off the back of the everyman, and strikes with a calculated but emphatic vengeance. Her killing grounds are the upper floors of corporate headquarters. Junkyard Leopard is her story. Oliver Brackenbury has to be applauded for creating such a distinctive and memorable anti-hero.

The financial crisis that peaked in 2008 is an emotive subject. Many people have lost their jobs and homes due to reckless greed and financial mismanagement by supposedly trustworthy bankers. They have often escaped any real punishment, thanks, in part, to equally scummy lawyers. The government let people down in bringing justice. The powerlessness of individuals to make change is addressed with The Figure. Despite the visceral violence, you’re on The Figure’s side, and just to ease your conscience, the people she kills show their ruthless unpleasantness and taste for illegal activities. We follow her as she blazes on a journey of vengeance through the financial district.

One of the most fascinating aspects of the book is the character of The Figure and her everyday alter ego, Mary. We follow two very separate characters, for the most part closed off to one another. The Figure is calculating, cold and efficient. Mary is nervous and shy. They are very different personalities and this dynamic dichotomy, encompassing both their lives, is engrossing. The opposing force to The Figure is Gerald Byrne, a CEO, financier, and young business leader in the city, who is brutally blinded but, nevertheless, a survivor of one of the early attacks. The implications of the attack affected all aspects of his life and business.

So, corporate greed is a major issue in the book, as is crushing student debt, and even terrorism. Mary’s boyfriend, Ahmed, is persecuted and attacked for being Syrian in the wake of a terrorist attack on the Sears Tower. The author is putting forth an analogy of executives as the real economic terrorists. The biggest question is this: what difference can one person make in a world filled with competing good causes and wrong-doers protected by money? 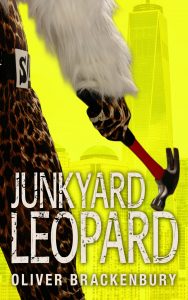 As the story progresses, life gets more complicated for Mary and The Figure, as a relationship and a copycat offer unexpected challenges and problems. The violence in the book will satisfy all gorehounds. To give you just a selection, you’ll find eye gouging, drills, bricks to the face, and acid. The Figure uses all kind of tools, often homemade, and each one is used once and discarded. What they all have in common is being brutal and terribly effective.

There is really clever symmetry at the end, as the book reaches its inevitable showdown and conclusion. I strongly recommend this book. Fascinating characters, ultra-violence, and leopard print style. What more could you ask for?