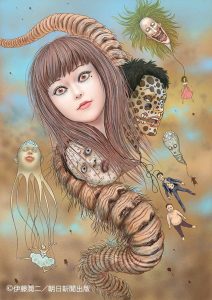 Though Junji Ito has had plenty of his comics adapted to live action movies, only one, Gyo, has ever seen an animated version. Until now. According to the Japanese publication news website Asahi Shinbum, Junji Ito’s short story collection Haunted House will be seeing an anime adaption in an unknown time in the future. As of writing, there is no information about which studio will be handling the anime or which story from the collection will be featured. Asahi Shinbum released a promo image that featured characters from different shorts fuelling rumours that the anime might be a short story anthology instead of a featured film.

Junji Ito has been a professional horror manga-ka (comic creator) for over thirty years and is one of the most respected horror creators in Japan. His most well-known work that have been translated into English are the manga’s Gyo, Uzumaki, and Tomie. Both Uzumaki, about a town that becomes obsessed with spirals, and Tomie, about a girl who cannot die, have been adapted to the big screen with the latter spawning eight sequels. Both have been officially released state-side with a number of other works adapted to film and TV still haunting late night Japanese television. He has also worked with Guillermo Del Toro on the now-scraped Silent Hill game, Silent Hills. 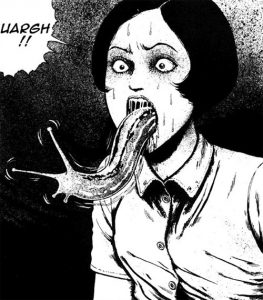 Ever popular, his work is being constantly translated for the English audience with the manga’s Dissolving Classroom and Fragments of Horror the most recent additions thanks to Viz Signature. So if you simply cannot wait for the anime, check out his ever growing collection available at comic and book stores across the land!