Synopsis:
A baby is imbued with a powerful evil spirit by the satanic cult that her parents belong to. Nine years later, that child struggles to keep her power contained as she is taken in by a young childless couple. 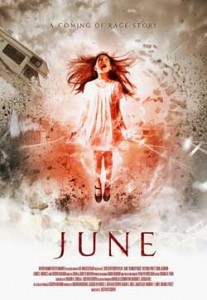 The demonic child is a narrative path that is as well-trod in horror films as the suspiciously cheap haunted house, and 2015’s June is the embodiment of that recycling. The film received a DVD release in the UK on January 11th, but its bland script and lack of scares leave it destined to quickly fall into obscurity.

That being said, June is far from the worst of its kind. For one thing, the cinematographer clearly knows what he’s doing, and it is a surprisingly attractive film to watch, which makes the glacial pace a little more bearable to sit through. The acting is also decent for the most part. Kennedy Brice (who played Molly in Season 4 of The Walking Dead) does a great job as the titular June, managing a quiet and sympathetic performance despite having very little to say. Casper Van Diem (Starship Troopers) is likeable enough as June’s unsuspecting foster father, despite some awkward line delivery towards the climax and an obsession with taking pictures of the child which is creepy in a way that the film didn’t intend.

The problem lies with the script, which is uninspired and makes less sense the more you think about it. Of course, it’s unlikely that anyone will think about it a lot, because the film is so forgettable that I had to watch it twice to write this review and even then struggled to remember parts of it. The premise seems simple enough at first: a satanic cult with ambiguous goals summons an evil spirit (referred to as Aer or Aery) and puts it in a baby, only for the ritual to be thwarted at the last minute and the child to end up in the foster care system. The trouble is, it’s never clear exactly what the ritual was supposed to achieve, or how close to completion it was. Naturally the cult wants June back to finish the ritual, but once it is revealed that they have been keeping a close eye on her while she was in foster care, the viewer is left scratching their head as to why the cult allowed her to be bounced around the system for years at all. It doesn’t help that the non-linear voiceover that crops up every now and then spoils a potential twist that the film had up its sleeve early on, making the payoff feel very flat, as well as raising the question of why certain characters acted oblivious about June’s frightening behaviour when they knew about her powers all along. 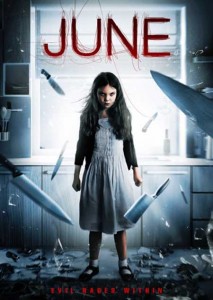 Still, an innocent child with an evil spirit inside of her which sometimes bursts out and hurts people could be interesting, and June does have a few Carrie-like moments where things fly around and bottles shatter, but these moments are far too rare. This wouldn’t be a problem if the slow-burn pacing was building up to something big, but the climax will leave you unsatisfied. June would have benefited from going all-out with a crazy display of June’s demonic powers before the end, but the film never quite builds enough momentum to be interesting or memorable, let alone scary. Watch it once if you’ve got nothing better to do, but you won’t miss much if you leave the room occasionally in the middle of it.