I got more than a little excited last month when we learned that Warner Bros. Television Group’s digital studio Blue Ribbon Content were to revive the Critters franchise with a TV series entitled Critters: A New Binge. It’s in pretty good hands too, with Zombeavers director Jordan Rubin set to direct, as well as writing and executive producing with his Zombeavers collaborators Jon and Al Kaplan.

Talking to Slash Film, Rubin has revealed that the series is a continuation of the four-film series, which began with 1986’s Dee Wallace/Lin Shaye-starring original and ended on something of a low point in 1992. He also revealed that bounty hunters will be involved, although they likely won’t be those we’ve seen previously.

“I wouldn’t say it’s an origin story because the Critters already exist in the world,” Rubin told the site. “They’re returning to Earth because they left one of their offspring behind that they’re trying to find. They’re being chased by the bounty hunters. So it’s a new binge, but it’s not an origin story per se like Batman Begins where you’re seeing from the ground up. This is a world that already exists that we’re joining.”

When asked about the series’ plot, he replied: “Let’s just say there was an impregnation that happened. There was a seed that was left behind and now that maybe has come to fruition, so they need to find it because they think it will help them maybe take over the galaxy. 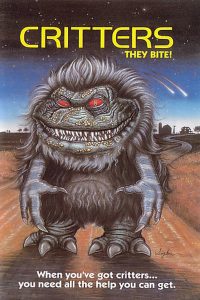 Perhaps most importantly for fans (and unsurprising given his approach to Zombeavers), Rubin confirmed his intention to rely on puppets and practical effects to bring the Crites to life. Not only that, but the Chiodo Brothers may even return to work their magic on the furry little buggers.

“We spoke to [the Chiodos] and I’m trying to make that work. I think that would be amazing, but we’re speaking to a couple different puppet houses,” Rubin said, adding: “I want to use animatronics as much as possible.”

The synopsis for the series goes like this:
“The critters return to Earth in search of one of their kin, who was left behind years ago during an earlier mission. They land in Burbank, Calif., where they wreak havoc on a group of high schoolers and their families.”

Rupert Harvey and Barry Opper are returning from from the original franchise to produce the series, which will consist of a planned eight 10-minute episodes. Filming is due to begin in the next few months.