Synopsis:
JONAH LIVES is a horror film from director Luis Carvalho and stars Brinke Stevens, Jocelyn Padilla and Ryan Boudreau. Part slasher film, part supernatural revenge thriller, the film centres on a group of teenagers who unknowingly raise a vengeful spirit and get caught up in it’s carnage. 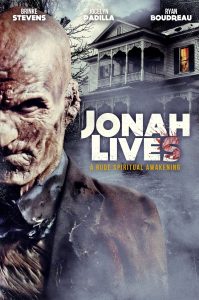 Limited by its micro budget and a disappointing sense of direction from Luis Carvalho, Jonah Lives left me confused. Was it trying to be bad in a good way or was it just plain bad? The answer after much deliberation is clearly the latter.

The film follows a group of six friends as retreat to the basement of one of their homes for a nights worth of entertainment whilst a swingers party takes place upstairs. When Francis (Ryan Boudreau), the self-appointed leader of the group suggests they play with an old Ouija board there’s a very brief sense of hesitation. Refusing to play along, Francis (James Barrett) watches in horror as his friends make contact with the tortured spirit of Jonah who is desperate to avenge his own murder. Knowing Tony’s sense of fear is growing the group decide to play a joke and summon Jonah to rise from the grave forcing the friends to deal with their culpability of their actions.

The problem with first time directors is that the quality of work, especially with micro budget horror, can be unsteady as they get to grips with their craft. Sadly, Luis Carvalho’s attempt with Jonah Lives is no exception as his own sense of direction is unsteady at best. As a whole the film is bitterly disappointing. Carvalho’s script is a predictable and lackluster. His characters are one dimensional, uncharismatic and un-relatable but most disappointedly, Carvalho decides to take most of his action off screen. I can forgive a poor script, and lack of chills if there are going to be some gnarly kills or something in the means of a payoff for investing my time. So as Carvalho and his team fail to do this there’s nothing positive to say about the film.

Collectively the cast are equally as awful. It can be argued that the script is partly responsible for this but it is not solely to blame. The delivery by almost everyone on screen is overplayed and lacks chemistry which in time became almost unbearable. Not one single performance is notable except for Cesar Pereira’s performance as a zombified corpse of Jonah. He was the only redeeming presence in the film. His make up looked great on screen and he was quite menacing but the fact that we don’t actually see him do anything was just frustrating. 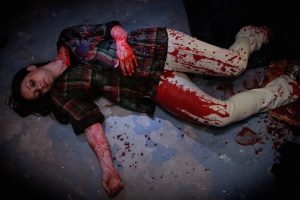 At the end of the day it takes passion to get a film made and for that I give credit to Luis Carvalho but there’s no time for celebration though as Jonah Lives carried far too many mistakes with it. With its laughable plot, over the top performances and lack of gore, Jonah Lives is a film which should have been left buried. Heed my warning and avoid this film at all costs.