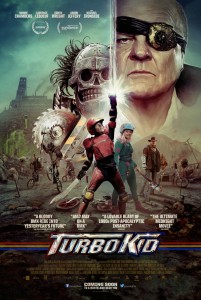 OK so it’s not exactly the pool party you were expecting; there’s no bikini babes or jelly shots, but this clip from Turbo Kid is still great. Who doesn’t love seeing  a big buy get assaulted by a gnome on a stick? Exactly.

Synopsis:
In a post-apocalyptic future, THE KID, a young solitary scavenger obsessed with comic books must face his fears and become a reluctant hero when he meets a mysterious girl named APPLE. Armed with little more than blind faith and an ancient turbocharged weapon, THE KID learns of justice and friendship and embarks on an incredible journey to rid the Wasteland of evil and save the girl of his dreams.

Turbo Kid has received some phenomenally brilliant reviews since it premiered at the Sundance Film Festival in January and over at Scream Towers we’ve given it a perfect 5 stars. Read our review here. It’s an explosive, imaginative and trashy 80s-inspired feast of the eyes and it’s impossible to place it in any one genre.

Take a look at the clip below and be sure to catch Turbo Kid when it screens at FrightFest on August 27th 2015.