It was announced last year that Dwayne ‘The Rock’ Johnson was set to produce and star in a remake of John Carpenter’s 1986 fantasy horror adventure Big Trouble in Little China. Things went a little quiet for a while, then Johnson insisted back in May that the project was still in the works. “That’s happening, man! That’s happening, that’s happening,” the wrestler-turned-actor told Fandango. “And again, that’s one of those things where you gotta take really good care of it.”

Well, taking “really good care of it” apparently has a somewhat flexible definition because despite Johnson reportedly gunning for some involvement from Carpenter, it seems the horror master has yet to receive a call.

Talking to Screen Rant recently, Carpenter responded to a question about the remake with: “It might be crazy… it might be great! I don’t know. Nobody’s told me anything. No one tells me anything [laughs].”

He continued, saying that “No one’s talked to me about it. Haven’t heard a thing!” before adding dryly, “Yeah – isn’t it great?”

It seemed wholly disrespectful that, nearly two years since the project first started moving, there has been no outreach to Carpenter. It echoes the situation with the upcoming Suspiria remake, about which Dario Argento said “I have never, ever been asked about it. I mean, I never got a call or anything.” 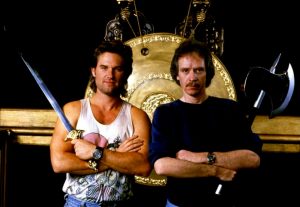 Carpenter’s original Big Trouble saw Kurt Russell on his finest comedic form taking on evil sorcerer David Lo Pan in the streets of Chinatown as delivery driver Jack Burton. It remains a masterpiece of genre-hopping and visual excess, and is one of Carpenter’s most unique and idiosyncratic films, marking the start of the director’s more ‘colourful’ period, which continued with 1987’s underrated Prince of Darkness and They Live in 1988.