It’s been too long since we heard anything about the reboot of John Carpenter’s Escape from New York, which Robert Rodriguez is set to direct. The new take – which is reportedly a prequel of sorts to Carpenter’s beloved 1981 film – was scripted by Mama writer Neil Cross, who this week spoke to Deadline to give an update on the film, revealing that Carpenter has read his script and given it his approval.

“Robert Rodriguez is attached to direct and it’s looking good and exciting,” Cross said. “It was quite a challenging script, it’s a challenging thing to reinvent. One of the most terrifying sentences I’ve ever heard in my life is ‘we’ve given the script to John Carpenter’. I crawled around for three days thinking ‘oh my god’ but we got John Carpenter’s seal of approval. He approved it and that’s all I need.”

Of his script, Cross continued, “You never quite know [if it’s finished] but I might need to do some rewrites and do some nip and tuck but in the first approximation, my job is done.” 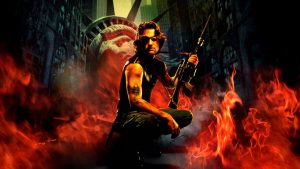 So far as we know, Carpenter is still set to executive produce the film. It was said earlier this year that studio Twentieth Century Fox were hoping to kick start a Planet of the Apes-style franchise with the film, which trades the walled-in, maximum security prison NY of the original for a stunning, supposed utopia whose citizens are kept in check by a female AI character called April.

The big question of course, is just who the hell can fill Kurt Russell’s mighty boots as Snake Plissken.