Johannes Roberts Takes us to THE OTHER SIDE OF THE DOOR 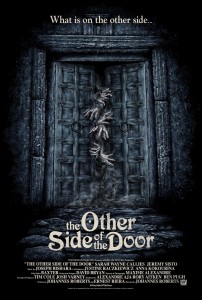 Cambridge born Johannes Roberts is one of Britain’s rising talents in the filmmaking world. Having made his first feature ‘Sanitarium’ at the tender age of 23, he has gone from strength to strength and is due to release the big budget feature ‘The Other Side of the Door’.

Scream Magazine caught up with him at FrightFest Glasgow 2016 to discuss his new film, filming in India and practical versus CGI.

“It is my first time in Glasgow but six years ago I screened a movie at an all-dayer. Since then I have been in and out and FrightFest but have never been to Glasgow”.

Johannes appeared very relaxed at the time, with his new feature due to be shown on Saturday 24th February 2016, I asked him whether the FrightFesters were being treated to a UK or European Premiere.

‘The Other Side of the Door’ is a European Premiere and I think it comes out in cinemas in the UK and America on the 4th March”.

Underneath that cool exterior I couldn’t help wonder if he was feeling just a wee bit nervous: “I am nervous. I am very honest about my work; I genuinely love this movie a lot. I just want people to love it.”

So I couldn’t help but ask how he would if it feel people actually didn’t like the movie? “It hurts. You know, you just have to go with it. You make what you love and then if it doesn’t connect with an audience it is painful. The bad reviews and the sort of general disconnect with the film can be quite tough to take. It is a real unpleasant side”.

The Other Side of the Door is a film that is, no doubt, a massive step up from his previous work due to the big budget, location, cast and working alongside top horror producer Alexandre Aja.

“It was a very challenging movie. It was my first studio movie. It was the biggest budget that I had ever had. We had a lot of people. I had a crew of 200-300 people in India. It was crazy. It was really tough movie to get off the ground and there were some dark days trying to get that green light. It was a tough movie to film with the heat in Mumbai – but it was a lot of fun and I genuinely had a blast making it. So yeah, it was a real challenge”.

Asking Johannes if this was his biggest movie to date, he commented, “Well, I am just actually finishing another movie called 47 Metres Down which is all under water.”

At FrightFest, we were lucky enough to have a sneak preview of 47 Metres Down in the form of a ‘sizzle reel’. From those couple of minutes shown it looked absolutely incredible.

The synopsis is as follows:
Two sisters on Mexican vacation are trapped in a shark observation cage at the bottom of the ocean, with oxygen running low and great whites circling nearby, they have less than an hour of air left to figure out how to get to the surface.

The imagery on that screen looked utterly breath taking and quite terrifying in the form of some monstrous sharks. With the water looking so blue and clear, no one would have figured that it was filmed in Basildon?! That’s right, filmed in a tank in Basildon with added broccoli?? That is the magic of the movies.

Moving back to Johannes’s current release, I wanted to know his thoughts on why us humans feel so compelled to open a door when everything screams ‘DON’T DO IT!”

“I don’t know… what I love about it, is that genuine mystery of someone saying don’t. It is just that kind of what? What is there? It is curiosity and human nature. I was chatting to someone about this the other day. They were asking if I was in the same horrible situation, my son had drowned and I was speaking to my dead son on the other side of the door, would I open the door? I said I think I probably would.

I think with the decisions that Maria (Sarah Wayne Callies) takes in The Other Side of the Door, for me are honest decisions. I would have done the things she did. You want that physical touch.”

The Other Side of the Door was filmed entirely in India; now you would think they would be having a general release? “You know what? The one place where it is not coming out is in India. Western movies just don’t play out there. There is just no audience viewing because they have such a big film industry out there. I was out there for six months and they would play the big, big movies and quite a lot of the time they were heavily cut. It is playing in Pakistan and all over the world but the one place that it is not… is India. It is very odd but it is financial decisions.” 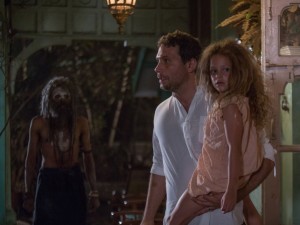 Now we have all heard the stories of when supernatural films are being made that ghostly apparitions or strange events will occur. Was there anything bizarre going on from The Other Side of the Door?

“I feel like I should say yes, but absolutely nothing!” Johannes goes onto explain, “I spent a long time in India, just actually researching and just being a part of the world. It was very eye opening. There is a cremation in the movie on a funeral pyre, which is not a very Western thing.

Their attitude to death is very different. We keep death very locked away in the western world. It is not seen or heard or spoken about and we wouldn’t sit and watch something like that. I would love to tell you some crazy supernatural stories about how we were fighting ghosts and demons every night but no … nothing.”

Johannes goes on to talk about filming in India: “It was hotter than hell out there. We shot during the summer months so it was seriously hot. There is a scene in the film, which is set in a small fishing village and I remember that day. I remember the little girl in the movie Sophia it damaged her. You just learn to deal with it but I loved the heat; I loved the whole place. I would kill to go back out there and do a movie. I arrived in Mumbai and that’s pretty much where you land and I hated it – the noise, the smell, the heat, the chaos and I thought I couldn’t stand this place.

We spent six months exploring the country and I thought we were probably going to shoot in Kerala. We arrived in Kerala and it was beautiful, beautiful seas, palm trees; it is more touristy and much more relaxed. So I found a place and I thought that this would be the right location and then we had to fly back out of Mumbai. We got to Mumbai and there is this dark chaos and I thought this is it. The exterior of the house is where Rudyard Kippling was born. It is a beautiful old crumbling house.”

The actors chosen for this film were all very real, natural people. I wondered whether or not the likes of Sarah Wayne Callies and Jeremy Sisto were specifically chosen because of their ability to portray real relatable people.

“You have to cast correctly. With the two kids, Sophia and Logan, I cast people who hadn’t done any films before. So they had this raw, unpolished feel to them which I think is fantastic. Sophia’s performance is incredible in the movie. With Sarah it was a tough role to play and I needed someone that you could see as a mother but you could see that she is someone falling apart. She goes down a pretty dark, dark journey. Jeremy is a very solid character; he is the one solid thing in the movie. You needed that warmth that he brings.”

There is the belief that horror movies do not attract large audiences to the cinemas. I was interested to find out, as a horror filmmaker, if this is something which is concerning.

“I think it depends on what kind of horror. Horror is pretty commercial. I guess this year we got The Forest, The Boy… The Conjuring 2 will be the one that does serious money. I guess the issue with horror is that there are a lot of different types of horror. The problem with horror is that it is not so much the size of the audience; it is the size of the budgets. Because the Blumhouse model which has been very successful, the model of doing a movie for 5 millions or under and then making a lot of the money at the box office has proved very successful. That causes a problem to maybe tell bigger stories than a couple in a haunted house. Blum is very savvy and he knows how to engage an audience. An audience wants to go into a horror movie and be scared and have jumps and frights, he just nailed that. It would be lovely if we could return to the days of space horror. I miss going to the cinema and seeing a group of people getting into an empty spaceship and wondering what is going on. That I miss a lot, those kind of bigger-scale horror movies, but sadly they are not being made. I would love to make one!”

The question of horror films following the same formula i.e. standard rocking chair or cat jumping out of a cupboard, as well as the much talked about topic, ‘practical effects’ obviously got brought up: “I haven’t got the cat scare but I do have a moving chair but it is not a rocking chair. It moves on its own (laughs). I have not done this before. I have done a lot of horror but I have never done proper ghost stuff. We had all the wires and books falling. It was a lot of fun to do but it is annoyingly complicated in a world where now we just do it CGI. To do practical effects is bloody hard. I think there is a nostalgia thing about practical effects. We do have a longing but when we see them on the screen we can think it’s a bit shit. Things have gone such a way that we have a yearning to go back but when we do go back its actually ‘oh it’s a rubber suit’. 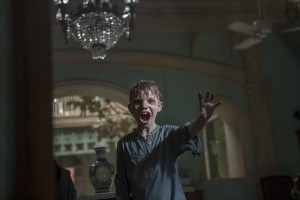 With The Other Side of the Door we tried to do it all practical but you could only go so far. You need visual effects as well to enhance it. The way to do it is to have visual effects augment the practical stuff. These are interesting times.”

So what is going to happen for Johannes following 47 Metres Down? “I have a Victorian ghost story that I am in love with. I think I would like to do that and again chatting with Alexandre Aja about working with him. Also talking about a Stephen King, a non-horror one.”

I thanked Johannes for taking the time to speak to Scream and it was a real pleasure making his acquaintance.