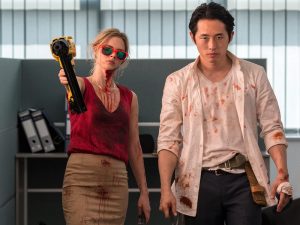 The Walking Dead’s Steven Yeun may be done battling the undead for the time being, but his killing days are far from over, as evidenced in Joe Lynch’s latest, Mayhem. The film, which premiered at this year’s SXSW now has a release date set, and will be in selected US cinemas and on VOD and digital HD from November 10th, through RLJE Films. It will then land on Shudder in 2018.

Yeun plays attorney Derek Cho, who is framed by a co-worker and wrongfully fired on the same day that an airborne virus breaks out in his corporate law office. Trapped in the quarantined building, he must fight not only for his job but for his life. Ash Vs. Evil Dead’s Samara Weaving co-stars, alongside Steven Brand (Hellraiser: Revelations) and Caroline Chikezie, who also appeared in Lynch’s Everly. 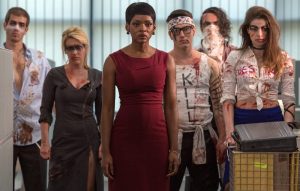 “We can’t wait to unleash the film globally,” Lynch said earlier this year, “and [we are] excited to share what festival audiences have been enjoying so far: a good old-fashioned, R-rated rollercoaster ride with balls and heart… you know, for kids.”