Jigsaw Will Be Released on Digital, DVD and Blu-ray in February 2018

The Saw franchise was welcomed back with loving arms into our lives when Jigsaw was released in cinemas on 27th October 2017; settling back into its Halloween spot. It was a fun and gruesome addition to the franchise and was filled with plenty of surprises as it opened a whole new world of deadly games.

Jigsaw will be released on Digital Download on 19th February before hitting DVD, Blu-Ray, 4k Steelbook and Boxset on 26th February 2018. 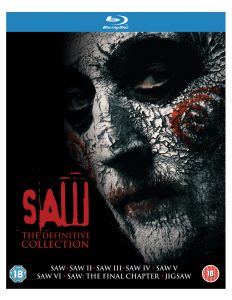 Synopsis:
Bodies are turning up around the city, each having met a uniquely gruesome demise. As the investigation proceeds, evidence points to one suspect: John Kramer, the man known as Jigsaw, who has been dead for ten years.

The special features for the releases are as follows:
* Audio Commentary with Producers Mark Burg, Oren Koules and Peter Block
* I Speak for the Dead: The Legacy of Saw
* The Choice is Yours: Exploring the Props