Jessica Chastain in Talks to Star as Bev in It: Chapter 2

In news that will surprise no-one but will please many, Jessica Chastain is in talks to star as the adult Beverly Marsh in It: Chapter 2.

The rumours being circulating almost instantly after the release of It (perhaps before) last year, with even Chastain herself expressing an interest in playing the character. It comes as no surprise, considering the friendship she has with director Andy Muschietti and his sister Barbara, as well as her having worked on Muschiettii’s directorial debut Mama back in 2013. 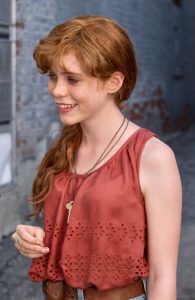 We think Chastain is a top-notch choice for the role of Beverly as she’s an actress at the top of her game and is an accurate match for the character’s looks. What else could you want?

It: Chapter 2 will see Andy Muschietti return to direct with a cast that, so far, includes Bill Skarsgard returning as Pennywise, Jaeden Lieberher as Bill, Jack Dylan Grazer as Eddie, Jeremy Ray Taylor as Ben, Wyatt Oleff as Stanley, Jackson Robert Scott as Georgie, Chosen Jacobs as Mike and Sophia Lillis as Beverly. Hopefully it will only be a matter of time before we can add Chastain to that list. Keep your eyes peeled for more!