After sitting in production limbo for a couple of years, the film adaptation of Paperfilms’ graphic novel series Painkiller Jane looks to be moving, with Jessica Chastain (Mama, Crimson Peak) set to both produce and star. 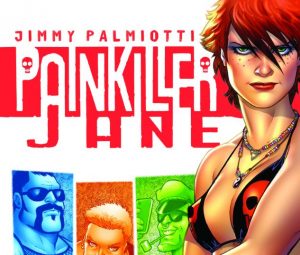 Based on the graphic novel by Jimmy Palmiotti and Joe Quesada, Painkiller Jane will see Chastain playing Jane Vasko, a New York cop who gets exposed to a chemical weapon during a botched FBI operation to infiltrate a major drug and human trafficking ring. The accident grants her superhuman regenerative abilities, and she sets off on a path of death and destruction as she seeks revenge on those responsible.

Back in 2014, horror’s favourite twins the Soska Sisters were attached to direct the adaptation, before things went quiet. With the film now back on track a confirmed director remains elusive, although we do know that Chastain will be producing through her own Freckle Films banner, alongside Lotus Entertainment’s Lenny Beckerman and Solipsist Films’ Stephen L’Heureux (Sin City: A Dame To Kill For). Bill Johnson, Jim Seibel, Ara Keshishian, and Palmiotti will exec produce.

Palmiotti has written volumes of Deadpool, Jonah Hex and Punisher, and is currently penning Harley Quinn for DC Comics. Painkiller Jane is not his only creation currently set to hit the screen, with Lionsgate having picked up his graphic novel Monilith.