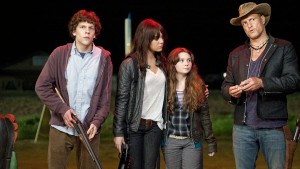 It’s hard to believe that it’s been nearly seven years since the release of Zombieland, and even more unlikely is the fact that a sequel has yet to emerge. A couple of weeks back though, the film’s writers Rhett Reese and Paul Wernick let slip to The Playlist that Sony were still hoping to put a sequel to the 2009 hit into production. With fans clearly still hungry for a Zombieland 2, it does now seem as though something is beginning to stir.

Zombieland star Jesse Eisenberg this week discussed the prospect, telling EW that:
“Yeah, it’d be wonderful to do. I know they’ve been trying to do it for a while, and I know they’re trying to figure out exactly what will occur in it. But it’s a kind of movie that, as soon as it came out, seemed appropriate to generate a sequel. … It takes place in this odd, created world and features an ensemble of interesting characters that it’d be curious to see more of. I would hope that it happens, and I’m sure everybody would be happy to do it if it happens and it’s good. It’s also a strangely beloved movie, so it’s a thing you have to get right. Some sequels you don’t have to get exactly right, but this is the kind of movie you have to get right because people like it for personal reasons, even though it’s a zombie comedy.”

It was reported back in 2014 that Sony had hired The Expendables writer Dave Callaham to pen a script under the supervision of original director Ruben Fleischer, who looked set to return to the director’s chair. This presumably still remains the case, although Sony themselves do seem to be keeping quiet about the project. No news yet as to whether the original cast members will return, but at least Eisenberg seems up for it.