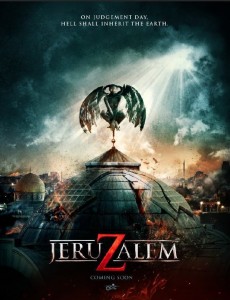 Synopsis:
When a couple of American young adults fly to Israel to visit the city of Jerusalem, a biblical nightmare falls upon the city.

Fledgling writers/directors, brothers Doron & Yoav Paz have clear designs: to shake up audiences and the horror genre alike with their latest feature, JeruZalem, which has a good old stab at reinventing the cinéma-vérité wheel with its state-of-the-art storytelling approach.

Fully embracing Google’s latest body-borne computer fad, Smart Glass, the Paz brothers whisk us away on a travelogue trip to the all-consuming scenery of Jerusalem; all experienced from the POV perspective of the mostly-heard-but-hardly-seen protagonist, Danielle Jadelyn – a wise casting choice given her previous experience as both a director and cinematographer. This spy specs approach, and the application-rich environment that comes with it – as gimmicky as it all might sound – arms the directors with a plethora of convenient storytelling devices, paving the way for a battery of similar found footage flicks I’m sure.

It’s all down to a generous father that the Smart specs come into play when he gives a pair to his daughter, Sarah (Jadelyn), as a gift before she heads off to Tel Aviv with her BFF, Rachel (Yael Grobglas). As soon as the two jet-setters are up in the air, they hit it off with a young and intrepid Indiana Jones type called Kevin (Yon Tumarkin) who soon twists their arms into altering their itinerary to explore Jerusalem on the eve of the Day of Atonement.

In terms of the lead players, the fact the central American characters were not actually played by Americans made some dialogue a little tougher to swallow but, to be fair, they do succeed in coming across as reasonably spontaneous, largely down to the fact that the two friends have genuine BFF camaraderie. Accordingly, the initial banter-brimming holiday frolics are a whole lot more bearable than home videos of my dad traipsing around the south of France in flannel shorts, white socks and sandals. For me, the best character, though, was the local jack-of-all-trades the backpackers meet, Omar, played by Tom Graziani. He just comes across as that typical charismatic guy you could so easily bump into and go out partying with on your travels.

But then the real star is, without a doubt, the location, particularly as the directors succeeded, where many before them I’m sure have failed, to film some of Jerusalem’s major sights such as The Wailing Wall. The eye-popping sites, labyrinthine alleys and creepier than creepy caverns really give the film an aesthetic seldom seen in any genre of movie, never mind those of a horror kind. It all sounds pretty idyllic up until now so you’re probably wondering when the shocks begin. To cut to the chase, there are three portals to hell: the first in the ocean, a second in the desert, and the third right were the protagonists are holiday making. The latter portal swings wide open, unleashing all holy hell as an army of winged, zombie-like creatures begin swooping down on scarpering human prey, accompanied by a monster of giant proportions which, despite its humongous scale, sadly gets little screen time.

The effects, particularly when the ragged-winged creatures rain down, are shockingly effective, creating all kinds of chaos in the streets of Jerusalem. Unfortunately, it’s not long before the film comes a bit of a cropper when it falls into the same kind of pitfalls another similarly-themed film fell into: As Above, So Below. Said film got the show on the road with an intriguing start but ended up fumbling around in the dark, resorting to cattle-prod scare tactics. Luckily the audience isn’t left in the dark for too long and, for the most part, the protagonists’ frantic flight to safety manages to muster a decent adrenaline spike.

The film’s climax gains plenty of momentum too, making sure the audience leave on a high. Without revealing too much, throughout the film everyone and anyone who crosses Sarah’s line of sight is picked up and facially recognised by one hell of a nifty little Facebook app. It all feels kind of gimmicky at first and I didn’t really expect it to serve any specific purpose but, lo and behold, it’s cleverly implemented to provide one of the film’s biggest twists. And just as that curveball was sinking in, JeruZalem’s denouement is as spectacular as they come, providing a beautifully chilling and highly satisfactory climax.

Whilst we’re essentially dealing with yet another found footage film that does descend into tired terror tropes now and again, JeruZalem still remains worth your while as it serves up some deviously deviant twists and I’ll be lining up to buy a ticket for the next trip the Paz brothers decide to take us on.