CBS Films announced on Thursday that they have locked in Jennifer Chambers Lynch to direct horror thriller Hellfest. Also onboard is near-legendary producer Gale Anne Hurd (The Terminator, Aliens, The Walking Dead).

Set in a horror theme park, Hellfest sees a masked killer taking out the patrons of a Halloween night party. Witnessing the carnage, the crowds initially believe it to be just an elaborate stunt, and all part of the show. 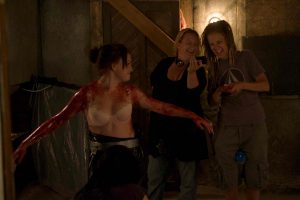 “We have loved the concept of ‘Hellfest’ since Gale brought it to us and we have been waiting for exactly the right director,” said CBS Films President Terry Press. “Jennifer came to us with both the passion and the vision necessary to make ‘Hellfest’ a terrifying Halloween tradition much like the growing phenomenon of the theme park horror nights enjoyed by millions the world over.”

Hellfest will be Lynch’s first feature since 2012’s gruelling Chained, previous to which she was known for cult drama Boxing Helena and 2008’s criminally underrated Surveillance. She is currently working on her segment for all-female horror anthology XX.

Production on Hellfest is due to begin this winter, with the shoot taking place at an undisclosed theme park.