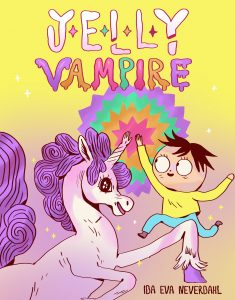 Norway has always been known as the land of extremes: extreme weather, extreme music, and extreme beauty. But it looks like a new king of extreme is looking to take reign and it’s not going down without a fight. That’s right, it’s the mythical EXTREME UNICORN! *AIR GUITAR* While unicorns may not seem like up Screams alley, Norway’s own dark humour comic, Jelly Vampire, can make anything pretty damn brutal. Recently teaming up with LA based Emet Comics, indi-creator Ida Neverdahl aims at bringing her collection of dark shorts about a girl and her unicorn to the states via Kickstarter and has already claimed fans all around the globe! While word about her is spreading faster than a fire on a church, the comic itself falls short of being anything to write home about and at best, is an homage to dark humour comics long past.

Jelly Vampire (which, as of yet, does not contain Vampires or Jelly), revolves around the adventures of a little dark haired girl, or woman as she does get drunk, named Lulu Lulusen. Lulu goes on various adventures that frequently end up taking a spooky turn such as wishing for her cat to be human and him changing into a grotesque baby or eating the candy kingdom she became princess of. The collection features a mix of one page jokes and longer works, with the longer ones frequently having her travel to strange and exotic places. It is here we meet her unicorn who skewers her enemies for her and where she becomes the princess of a land of human faced unicorns. Lot of unicorns in this sucker. 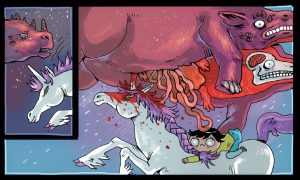 While Jelly Vampire may seem like it would be a fun read for the whole family, this is definitely more of a ‘teen and up’ type of comic. The work plays with concept of cute and innocent but quickly veers off into the other lane for a punch line. It also seems to delve inspiration from early Slave Labor Graphic works such as Johnny the Homicidal Maniac and Lenore, the latter almost seeming like the direct inspiration for the comic. This comic is aimed at the dark, loner kid in all of us. Unfortunately, unless you were that kid or really love the spooky cute subculture, it’s kind of a dumb comic (though the slutty jelly people are pretty funny). Take the ‘dark’ angle away from the punchlines and the jokes come off as half done and lazy while frequently using the ‘end at an awkward moment’ as the end of a comic strip. The shorts are a little cleverer by forcing the creator to work within four panels and even then, if you ever read an online comic, you’ve read these shorts. This comic is nothing new. 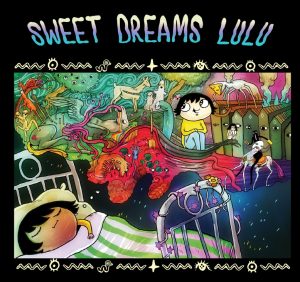 But don’t let that get your hopes down! The art is pretty great. While not the most technically defined, Neverdahl does have a firm grasp of colour and animation. The flow of the panels is very smooth and it feels like it could fit well into Cartoon Networks lineup. Her use of colour gives the work a dreamy, but scratchy Lisa Frank type of feel without going too overboard. If anything, it’s interesting to see her style mature as the series progresses.