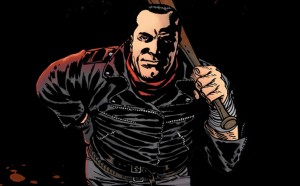 With the recent news that The Walking Dead will, unsurprisingly, be continuing for a seventh series, a new villain has now been revealed. Jeffrey Dean Morgan has been cast as Negan, who is set to appear in the finale of Season 6.

In the comics, Negan is the leader of a violent group called the Saviors; a terrifying group who use violence and other nasty means to intimidate communities such as Alexandria. He becomes a primary villain when he kills Glenn with a baseball bat covered in barbed wire – ouch. Poor Glenn. There was a slight tease in the Season 5 trailer of Glenn getting his head smashed in, which unsurprisingly, had the internet in a bit of a frenzy.

Andrew Lincoln who plays Rick Grimes dropped a bit of a hint in February when he announced that the character of Negan may be on the horizon, so this news is not that surprising. With Negan’s frequent use of the f-word, showrunner Scott M. Gimple expressed how difficult it would be to cast him. However, he has since described his excitement for an upcoming story arc that involves the new character, so it seems that this little issue is a thing of the past.

The Walking Dead airs every Sunday and production begins on the Season 6 finale this week.