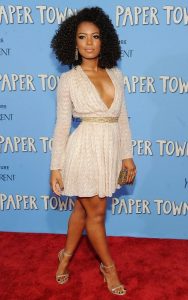 Paper Towns star Jaz Sinclair has been cast in Netflix’s currently untitled Sabrina series, which will be based on the Archie Comics graphic novel The Chilling Adventures of Sabrina. She has also starred in The Vampire Series and will feature in Sylvain White’s upcoming Slender Man flick.

Sinclair will play the role of Sabrina’s “brash, empowered and outspoken” best friend at Baxter High.

Sinclair joins the cast that additionally stars Kiernan Shipka in the lead role of Sabrina Spellman. You’ll probably recognise her from A24’s spooky The Blackcoat’s Daughter, but she has also featured in Mad Men and Feud.