Jaw-Dropping Trailer for Sinister Shocker The Evil Within

With worldwide sales rights picked up at the AFM by Vision Films, an astounding trailer has landed for The Evil Within, along with the poster art.

Getty and his own FX team created all of the film’s complex special effects and animatronics, which look pretty fucking spectacular.

Synopsis:
Dennis Peterson (Koehler) is a mentally challenged teen who lives with his older brother, John (Flanery). While John struggles between caring for Dennis and maintaining a relationship with his increasingly impatient girlfriend, Lydia (Meyer), Dennis finds a friend in his own reflection in an antique mirror. But in reality the reflection is soon revealed to be an Evil Entity (Berryman) who is more charming, smarter, and stronger than Dennis and instructs him to do horrific things in order to ‘fix’ his brain.

Tortured and confused, Dennis embarks on a murderous rampage, collecting the bodies in his basement. A police investigation, helmed by a determined social worker (Darby), targets the Petersons in an attempt to uncover the truth behind the murders. With the walls rapidly closing in, Dennis makes his final play… with dire results. 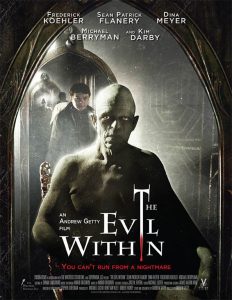 Producer Michael Luceri says in the press materials: “Andrew was such a perfectionist; each and every shot had to be perfect before he would move on. When he was young, Andrew told me that he would have these really powerful, twisted dreams, so scary that he didn’t want to believe they came from inside him, so he had this idea that it was this ‘storyteller’ who created the dreams, and that became the genesis of the film’s story.”

“This film is downright mesmerizing and creepy,” says Vision Films’ Managing Director/CEO Lise Romanoff states. “I hope we make Andrew and his family proud by releasing this incredible work of art.”

Vision Films is planning a US cinema release for 2017.