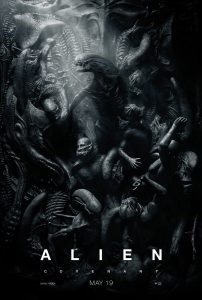 An astounding and jaw-dropping new poster has been unleashed for Alien-Covenant and it’s a hellish mess of xenomoprhs and their human victims. Some fans have speculated that the Alien Queen lurks at the top of the poster, suggesting that she’ll be making her presence made in the upcoming sequel.

This poster is gob-smackingly brilliant and we are dying to get our hopes up for a spectacular sequel, but something is stopping us from getting too excited. It’s impossible not to anticipate the new Alien with some trepidation, because we’ve been let down before and Prometheus promised a great film, but only delivered a great trailer.

Ridley Scott has promised to answer questions that were left unexplained in Prometheus, stating that we’ll be shown who did it and why. He has also confirmed that we’ll be shown every life stage of the Xenomorph which sounds promising and also suggests that the Queen Alien will appear again.