Jason Goes to Hell Director is our Secret Santa

Not to be confused with the 2015 Canadian slasher of the same name, Secret Santa sees a family getting a little too open and honest with each other on Christmas, leading to some bloody solutions to long-buried resentments. Check out the gleefully bloody trailer below! 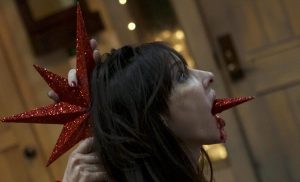 Secret Santa was directed by Adam Marcus, who began his career helming 1993’s much-maligned (though admittedly never seen in anything close to uncut form) sequel Jason Goes to Hell: The Final Friday. Marcus remained absent from the horror genre following his debut, before returning to script Texas Chainsaw 3D in 2013.

Marcus also co-wrote Secret Santa with regular collaborator Debra Sullivan (Texas Chainsaw 3D, Momentum). The press materials provide us with this lengthy synopsis:
“The holidays are a time for backstabbing and silent, annihilating judgment; but for the Pope family the time-honored tradition of passive-aggressive snark is always masked with a smile. But not this year. April Pope, the family’s golden child, is clean and sober and working her twelve steps. She has a new life and an amazing boyfriend, and she’s ready to make amends with her sister, Penny, for a horrible prank she pulled on her when they were in high school. April figures her mother, Shari’s, Christmas Eve party, complete with Secret Santa game, will be the perfect moment for forgiveness. Her gift and act of confession will help heal the tensions of all her loved ones. 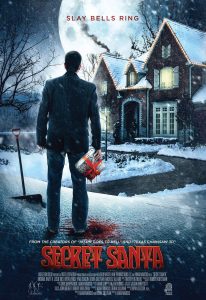 But there’s someone else with a different idea…

The Popes run one of the country’s largest pharmaceutical companies, and someone’s going to give them a taste of their own medicine. Literally. And with a military grade truth serum spiking the holiday punch, anyone who has a cup will lose their mask of civility. And before they know it, saying what they wanted to say turns into doing what they want to do; and the holiday table soon runs red. It’s a Christmas massacre as those who haven’t drunk the punch try to control the ones who have. This year the truth doesn’t hurt… it kills!”

No release info is yet available.