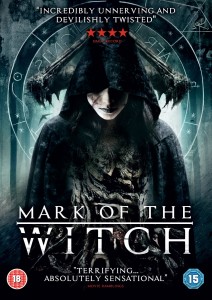 Originally screening at Film4 FrightFest as ANOTHER, musician/writer/director Jason Bognacki’s hallucinatory love letter to Giallo thrillers, MARK OF THE WITCH is all set to release in the UK this coming February 15.

In celebration of the impending UK home release through Metrodome, SCREAM’s Howard Gorman caught up with Bognacki to talk all about this Argento-tinged take on witchcraft…

SCREAM: The film is based on a short and you even used some scenes from the short in the feature. Why did you decide to keep some of the original scenes and was it a challenge to maintain the same aesthetic given how long it was since you shot the short?

Jason Bognacki: We decided pretty early during the shooting of the short for ANOTHER to ramp it up and turn it into a full length feature. I always had that in the back of my mind, so making the transition wasn’t too difficult. Having a short film already shot was a bit of a mixed blessing though; it allowed us to see what was working, but on the other hand we were locked into a certain direction of those earlier scenes. In editing I decided a lot of those short film scenes worked so well, and belonged in the feature. On the technical side the short was shot primarily on the RED ONE and by the time it came to shoot the feature, my EPIC had arrived. Thankfully the two camera’s footage cut together beautifully. In the end you can’t really tell which scenes are from which round of shooting.

SCREAM: You have described yourself as an experimentalist at heart. When making MARK OF THE WITCH did you find yourself constantly second guessing your decisions or did you stick to a concept you pretty much had down on paper and in your head beforehand?

JB: I don’t think there was much time on set for second guessing. With such a small crew and multiple duties on set I needed to have a very clear vision of what we were after for each day. We typically started our days with a story board review and a walk through of the scene. That being said, the experimentation would come at the times when we’d finished the pages for the day, and had time to explore the material further. Many of those moments made it into the film.

SCREAM: I read that you have trouble sleeping and that allows you to be as productive as you are. Would you say that a lack of sleep, to some extent, plays a part the surreal atmosphere and aesthetic of your films?

JB: Yes that is true. The way my brain is wired, I find it really hard to shut things down at night. I have very active sleep habits, and it’s not uncommon for me to wake up in the morning and discover I had been up the night before moving furniture, taking apart cameras, sleepwalking, and, on occasion, experiencing night terrors.

Because of this I have always been fascinated with sleep and dream states, and the surreal, hidden meaning of their imagery. With MARK OF THE WITCH I tried to create a waking nightmare for Jordyn; on the surface her reality is believable and expected, but as the film plays out, she begins to discover that on another level not far below the surface lies a darker force at play. I see her character as if she’s caught between sleep and consciousness, where reality is fluid and her mere existence within it disrupts its placid state; stirring up the dark sediments in her mind that drag her to its depths. 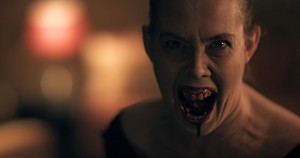 SCREAM: In the UK the film title is now MARK OF THE WITCH. Where did the title ANOTHER arise from and are you happy with the UK title?

JB: There was some discussion about a title change when releasing in UK/Europe as there has been some confusion online with the live action movie “ANOTHER” based on the anime. Back when we started this project there was no ANOTHER film to speak of so it wasn’t even a thought. I don’t hate the title but I do wish they had chosen to go with the original ANOTHER.

SCREAM: Whilst you welcomed inspirations from the likes of Dario Argento and Jess Franco, I read that you are more interested by people around you and particularly the music you find yourself writing when preparing a script. How do people and music influence the way you write specifically?

JB: I do love people watching and daydreaming plot ideas around the interesting faces I see. When living in Hollywood I was really into street photography and capturing the wild characters living around town. I am intrigued by faces in the crowd, and the stories there. When casting for MARK OF THE WITCH we were looking for interesting faces, faces that told stories by themselves. We were very fortunate to work with the actors we cast.

I’m also really influenced by music. Sometimes an entire scene can be living between music notes. It’s not uncommon for me to compose music when writing. It helps paint the scene for me. A lot of the music I wrote for “The Red Door” came from those type of scriptwriting/composing sessions. Unfortunately, I didn’t write the music for MARK OF THE WITCH, but a lot of the ambient beds and tones I created did influence the film.

SCREAM: Do you pretty much have an idea for an entire soundtrack before an actual script is completed for example?

JB: For films like “The Red Door”… and “Beyond the Red Door” sure. I had the soundtrack in my head before those films were even written. On MARK OF THE WITCH, before the editing process even started I was making a lot of the drones and ambient beds used in the film. Those sounds and tones really informed how I structured and cut the final scenes. On the next project I look forward to working with a few composers to expand the range of sound and scoring.

SCREAM: Obviously you have a clear penchant for everything Giallo. What is it particularly about that style of filmmaking that inspired you to make something of a similar style for today’s generation? 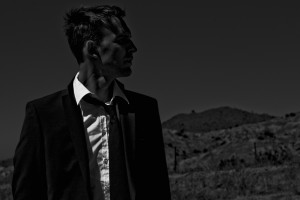 JB: The great thing about those older Giallo films is that they pushed boundaries in so many ways. It seems today there’s a lack of filmmakers taking chances… with a few exceptions. The plethora of jump scare antics and remakes of remakes take genre back. Genre pictures should be driving innovation. With MARK OF THE WITCH I was trying to revive some of the spirit of those films.

SCREAM: At times some of the story jumps almost incoherently but you rein us back into the plot really effectively. Aside from this technique, you also use a lot of subtle, distorted audio and visual tricks to arouse the audience’s senses. It certainly creates a very hypnotic aura about the whole thing. What exactly were you trying to elicit in the audience’s minds by using these seldom used techniques?

JB: I made this film for fans of Giallo. Those early films are known for their stylish camerawork, driving musical arrangements, and of course their shocking scenes of horror. I believe we delivered on that. With MARK OF THE WITCH I wanted to plunge viewers into Jordyn’s “Demonic Schizophrenia” to experience her nightmare first hand. MARK OF THE WITCH’s “hypnotic aura” feel comes from a hypnotizing mix of lush visuals and fields of sound and saturated color. These influence the viewer on a subconscious level… it’s almost spell-like. Subtle twisting of song, and skewed visuals add to the unsettling world enveloping them. They are lulled into the sickening dream turned nightmare.

SCREAM: You had pretty much complete control over the entire film: writing it, directing it, video effects, editing. I think your assistant cameraman, Matt Stiller, had a fair amount of influence and provided a lot of support, but was it important to you to hold so much control. In hindsight, do you think it could have been maybe more productive having the help of more people just to hear what they had to say rather than taking almost a leap of faith?

JB: With any project there is a certain leap of faith that has to be taken. With MARK OF THE WITCH I made this film for $25k, and with such a small budget it was out of necessity that I took on so many roles in production and post-production. I would love to have a crew and proper production staff on the next project, but I will say having such a small crew (1-2 people on most days) had its advantages… We could be very nimble with set ups, and our shoots felt very intimate; almost like a bunch of friends getting together to make a film. We were a very tightly-knit group.

JB: Paulie was a pleasure to work with; we knew we wanted to work with her as soon as we met. After her audition the role of Jordyn started to come to life and move in a new direction. Paulie has such a fun loving, innocent presence that we wanted to contrast that in the film with what she ultimately becomes. So we ramped up some of the extremes we put her through in the film.

SCREAM: Also, I think you were quite demanding on the actors and actresses because you were adamant to see their complete ranges of emotions rather than just seeing someone angry or seeing someone sad. You wanted to film each actor in one state and keep the cameras rolling as they changed emotions. Was that tough for you and for the actors or were you all able to catch that on the camera easier than the actors first thought?

JB: Not too demanding… I preferred setting up a dynamic and letting the actors have at it. I hate nothing more the compartmentalizing a scene and dissecting it and expecting it to be natural. The cast performed the task superbly.

SCREAM: Most of the film was shot at actual locations rather than on soundstages. Did that pose many problems or quite the opposite?

JB: The budget being what it was, we needed to shoot on existing locations. Some of which we had to beg to have access to. Being flexible with locations did prove challenging but on screen it was worth the added stress.

SCREAM: I think you have said that there will be a bonus on the DVD which is a scene that sets up the possibility of a sequel. Can you enlighten us about that and do you actually have plans for some kind of sequel?

JB: I wouldn’t rule out revisiting these characters. Quite unexpectedly after the UK premiere of MARK OF THE WITCH we were contacted about novelizing the story. I would love to see a continuation, that’s why I added the extra scene for the film’s release. The novelization project is currently in development and we will have to wait and see if things pan out for Jordyn and her witches. 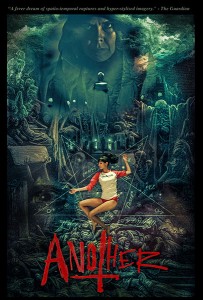 SCREAM: There were plans for quite a while to release your previous short films on DVD. Will that be coming to fruition any time soon?

JB: There were plans but we opted to put them online for streaming (fullframefeatures.com). I still get requests for a DVD/Blu-ray of the compilation so I wouldn’t rule out some kind of DVD release, as there are some films we haven’t put online yet. We’ll see.

We’d like to thank Jason for speaking to SCREAM and recommend you pre-order your copy of MARK OF THE WITCH.

In the meanwhile, we’ll leave you with a trailer for the film:

ANOTHER – OFFICIAL TRAILER from Jason Bognacki on Vimeo.

FIRST LOOK AT MY BEST FRIEND’S EXORCISM
Share this...