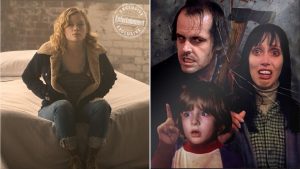 Stephen King and J.J. Abrams have teamed up for the HULU series Castle Rock, set to debut on the streaming giant tomorrow (July 25th). The show will weave a terrifying tapestry out of disparate King tales that take place in and around the fictional town, so expect nods to The Body, The Dark Half, and Cujo, among many others. Jane Levy (Evil Dead, Don’t Breathe) has a starring role, and her character’s name suggests King and Abrams are going far from rural Maine—perhaps all the way to the Colorado Rockies.

While we already knew Levy was playing a character named Jackie, we now know her surname—and it’s Torrance. King and horror movie buffs needs no reminder that the Torrance family were the ones trapped in a snowbound hotel in The Shining as nefarious forces worked to utterly undo them. The name Jackie Torrance is especially reminiscent of Jack Torrance, the novel’s central character, played by Jack Nicholson in Stanley Kubrick’s 1980 film adaptation.

So, are the characters related? Levy played coy when cornered at Comic-Con this weekend, telling MTV: “Jackie, my character, brushes up very closely to a famous King character.” That’s still a confirmation if you ask me. Give the trailer and synopsis for Castle Rock a spin below. 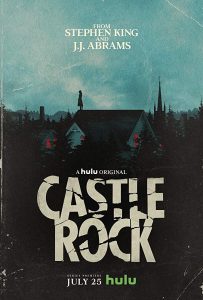 Synopsis:
Castle Rock may be the most notorious fictional town created by Stephen King, and it’s also the setting of a new Hulu Original series, premiering July 25. In this short documentary, we visit the actual places in Maine and explore the actual events which inspired King to write about Castle Rock. Then, we learn how the co-creators of the on-screen version of Castle Rock incorporated the town’s dark history into this original story set inside the Stephen King universe.