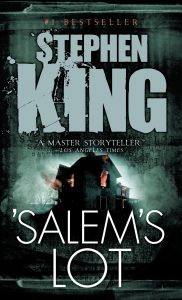 Salem’s Lot has already been adapted twice, most memorably by Tobe Hooper in 1979. The novel was also turned into a mini-series in 2004, starring Rob Lowe and Donald Sutherland.

Gary Dauberman (It, Annabelle: Creation) will write the script for the new adaptation, with Roy Lee and Mark Wolper also serving as producers. No word yet on who will direct.