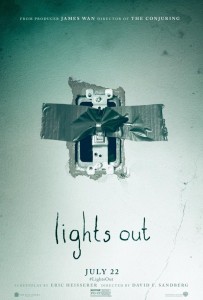 The first trailer has hit for upcoming chiller Lights Out, a film produced by James Wan, who seems to have the monopoly on worthwhile studio fright flicks at the moment. The film, directed by prolific horror short director David F. Sandberg, is set to hit US cinemas July 22nd, with a UK release following on August 19th. It is based on the director’s own 2013 short film of the same name.

Wan produces Lights Out along with Lawrence Grey and Eric Heisserer, who also wrote the screenplay. The official synopsis reads:
From producer James Wan (The Conjuring) comes a tale of an unknown terror that lurks in the dark. When Rebecca left home, she thought she left her childhood fears behind. Growing up, she was never really sure of what was and wasn’t real when the lights went out… and now her little brother, Martin, is experiencing the same unexplained and terrifying events that had once tested her sanity and threatened her safety. A frightening entity with a mysterious attachment to their mother, Sophie, has re-emerged. But this time, as Rebecca gets closer to unlocking the truth, there is no denying that all their lives are in danger… once the lights go out.

Warm Bodies star Teresa Palmer (whose screen debut was as a poolside reveller in Wolf Creek) leads the cast, alongside Maria Bello (A History of Violence), Gabriel Bateman (Annabelle) and Twilight’s Billy Burke.

With Wan’s The Conjuring 2 arriving in June, the multiplex is gonna be a creepy-ass place to be this summer.