It’s a late night in a sleepy English town’s police station when all hell breaks loose. Jackals begins when three individuals enter the police station and brutally murder and then behead everyone inside. A unique sigil is painted in blood on the police station wall as a calling card and message. This sets the tone for the rest of the story. Visceral violence with sharp instruments, knives, axes, and nailed baseball bats are the order of the day.

We find out our killers work for The Order, a secret society. The Order is Illuminati that believe in embracing the primitive urges and killing indiscriminately without remorse. The Jackals are small units who carry these tactics out. The thrill of the kill and the hunt leads us to the main plot of the story. Jesse and her husband are out for their anniversary and are in the wrong place at the wrong time. Targeted by the Jackals, Jesse has to play a game of cat and mouse or her hostage husband will be killed.

Jesse is a strong female character with much more fight than the Jackals could ever have expected. Joining her on the wrong end of the chase, we also have cocaine fueled Detective Inspector Class. He’s a policeman with a dark edge who is trying to make sense of the murders. He becomes involved through his own search for Jesse and the Jackals. Class and Jesse make a good team, and the strength and fortitude of Jesse is one of the highlights of the book. 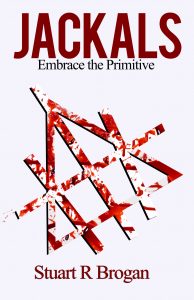 We do get some insight into the characters of the Jackals. They are not faceless killers. Felix, the leader, has to keep control of his team. Especially Denny, who’s a homicidal nutcase, and who even wants to kill his cohorts. Other Jackals come and go. I liked the tense power plays between Felix and the other Jackals, always struggling to hold on to dominance, with the threat always there. At one point we do get a great deal of exposition about the Jackals and those behind them.

The cat and mouse game becomes extensive as Jesse and Class lead a chase across the UK. There is a third party, led by an ex-member of the Order who is also chasing the Jackals. This book is filled with violence, and the Jackals’ mantra of embracing the primitive extends to weapons, so lots of blunt force and sharp instrument trauma fills the book.

There is a twist in the tale, some unexpected shocks, and there is definitely room to expand on the Order in future books. Overall this is an enjoyable read, but more in the action realm with horror elements than the other way around.