It’s About Time; New Poster for The Last Sharknado

The end is nigh for the Sharknado franchise (it’s about time! – their words not mine) and to celebrate/mourn the end of a fantastically fun B-movie era, we have a new poster to share with you. 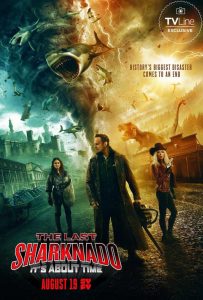 The aptly titled Sharknado: It’s About Time will see Fin (Ian Ziering) travel back in time to stop the Sharknado that started it all, hopefully putting an end to the sharknados for good.

Remind yourself of the first teaser trailer below. It’s short and sweet, teasing a sequel that is going to be expectedly meta, very silly and packed full of those killer ‘nados we’ve come to love (or loathe) since 2013.

Sharknado: It’s About Time stars Ian Zierig, Tara Reid, Cassie Scerbo and Vivica A. Fox and will premiere on 19th August, during Syfy’s famous shark week which runs from 12th-19th August 2018. Will this also be the final annual shark week?!