The lucky folk in Italy are set to have the opportunity to purchase one of the most gorgeous looking Blu-ray’s of all time for George A. Romero’s Dawn of the Dead and it features a 4K ultra HD copy, too. Obviously, the Blu-ray will be region 2, so those across Europe and the UK will also be able to get their hands on a copy. Sorry, readers in America and Australia.

A restored version of Dawn of the Dead recently screened at the Venice Film Festival, with Dario Argento and Nicolas Winding Refn working on producing a 4K Ultra HD collection and here it is. Isn’t it beautiful?

The collection will feature a massive 5 discs that include the European cut Zombi, as well as the theatrical and extended cuts of the film. There will be a multitude of special features and they are as follows: 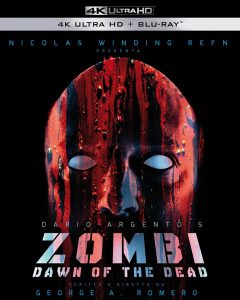 This phenomenal edition of Dawn of the Dead will be released on 21st November. Ready your wallets.