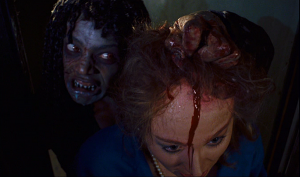 Lamberto (son of Mario) Bava’s Demons is an outlandish, undisputed classic of 1980s Italian splatter. The 1985 film is a celebration of horror; a gleeful concoction of wild characters, cornball dialogue, motorcycle carnage and levels of lurid gore seldom reached in any contemporary zombie fare, all set to a radical ‘80s metal soundtrack.

Demons, which was co-written and produced by Dario Argento, spawned one official sequel and a number of re-titlings of mostly unrelated films cashing in on the name. Indeed, no less than four films have been known somewhere and at some point as Demons 3.

More than 30 years on from Bava’s cult favourite, Sergio Stivaletti – the special effects legend who created Demons’ icky set-pieces – has hinted at a genuinely exciting bit of remake news. As reported by DUHD.com, a discussion between himself, Argento and Bava resulted in these comments from Stivaletti:
“We all wish Italian horror could return again but we know how unlikely that is. Yet, we go to conventions across the world and people remember our work. So there is an audience out there for a new Demons movie – we are all sure of it.”

Stivaletti then drops his bombshell: “We have been speaking about a new demons movie for a short time now. Dario, Lamberto and myself – maybe a 3D version of Demons, a remake that features the old crew”.

For now of course, the idea exists only as a conversation between three old friends. If they’re all onboard however, it’s hard to think that these guys couldn’t make something happen. Demons reunited? In 3D?! If you’re not getting excited right now, then as Tony the Pimp would say: “You ain’t worth shit!”