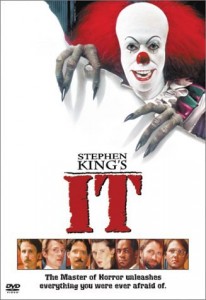 Synopsis:
A group of friends reunite after thirty years apart, when a demonic clown they encountered as teenagers, starts killing children in their hometown.

The early 90s saw an outbreak of Stephen King novels being adapted into miniseries’, starting with this three hour production from director Tommy Lee Wallace. At the time, some of King’s epic, sprawling novels were considered much more fitting to the medium as greater durations amounted to fuller, faithful adaptations of his mostly juggernaut works (“IT” is a whopping 1138 pages).

“IT” was the frontrunner and arguably the best of a flaccid bunch of 90s TV adaptations. It’s also the first since Salem’s Lot in 1979 that was filmed for the medium, but Wallace’s adaptation remains a capricious, wavering work. TV trappings instil a flat, insipid air while hack dialogue and makeshift effects sometimes hinder the horror. Despite this, colourful supernatural sequences and wonderful characters go some way to compensate for the trashy ham-fisted theatrics along with Tim Curry’s excellent, seething performance as Pennywise the Dancing Clown.

The first half introduces its protagonists as teenagers in 50s, suburban Derry, at the time when the gang first encountered the malevolent demon clown. Repeatedly jolting back to “present day” 1990, the grown ups receive calls from their one friend who remained in Derry, to inform them that Pennywise has returned and killed again. The episodic manner of this narrative unravelling is fitting to the TV medium as it breaks down the flashbacks and intros into digestible chunks that unify for a reasonably cohesive first half.

The flashbacks provide enough background to enrich the characters in a way that a standard cinema adaptation simply wouldn’t have time to do. Observing the kids getting to know one other and become friends in their childhood is engaging and compliments the unfurling horror with a welcome poignancy. Pennywise’s calculated, frightening intro: gradually revealing himself to a little girl in her garden from behind white sheets on a wind swept clothes line, is the stuff of bed-soiling terror. That giant, teeth-laden grin twisting into a snarl of intense, maniacal evil is magnificent when compared to his irksome prancing beforehand. Cold staring at the kids like he already owns their soul is one of the small nuances of Curry’s performance that instills a fitting dread and contributes to “IT” being so much more than the by-the-numbers adaptation it could have been without him.

Yet “IT” remains massively flaw-ridden, especially in the latter half. Cardboard dialogue, shoddy plotting and a last act monster that toddles like the microwaved afterbirth of Dali and Giger, contribute to an erratic finale that almost collapses entirely under the slapdash execution. But there are so many memorable moments that compensate: Pennywise coaxing a little boy into a sewer with a paper boat and balloon is totally sinister and features the classic “They all float down here!” line which is slowly becoming the stuff of horror legend and goes on to be repeated several more times throughout the movie even though it doesn’t always make sense. Despite some of the characters being a tad rasping and stereotypical they are imbued with enough obligatory depth to ring true and the supporting performances are decent.

Pennywise’s ability to transcend reality and cause horrifying hallucinations is intriguing but the character and narrative patterns sometimes overly echo Fred Krueger and the Elm Street films. Curry’s japing monster gets into heads and daydreams to mess with minds but he is significantly more vulnerable than Krueger and less of a threat. This is due to the fact that Pennywise can be injured by simply squirting him in the face with an asthma inhaler or sharp-shooting an earring into his stomach if you believe it will cause harm, which makes him not half as scary as the bastard son of a hundred maniacs. But Curry’s turn is undeniably remarkable. Turning a middling villain into a domineering presence makes “IT” the best of an adequate bunch of King TV adaptations. If only we could have seen more of the monster that made it so special.