ISLAND OF THE DOLLS: Book Review

So you get sent a book to review and you read the synopsis and think this is just up my street, but hang on, I recognise the title, have I read this? Turns out no I haven’t, but I do have books one and two in my TBR pile.

Will I be rushing to read them after this one? 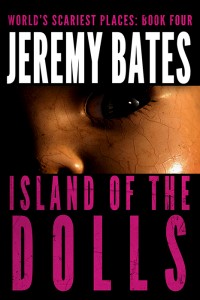 Jack, Pita, Jesus, Eliza, Nitro and Pepper are on their way to Isla de Las Munecas, a reportedly haunted island in the middle of an ancient Aztec canal system. Pepper is there to make a documentary. The rest are there for fun and a break.

This is not going to be anyone’s idea of fun. Especially when an unknown killer is on the loose and hell bent on making sure no one leaves.

So what are the main things that scare people? Monsters, vampires, werewolves, aliens, clowns and oh yes…..dolls. I have to admit to being a scaredy cat when it comes to dolls. No idea why but they do the business on me. Isla de la Munecas is a real place. Look it up. When you see some of the pictures, they will scare you. They are just plain weird. And scary.

Then read this book. It will give you the major creeps. It’s one of those that will make your skin crawl.

Characters wise in this one, we have a group of very strong individuals who are all strong in their own rite for their own reasons. When you put them all together, they make up one of those groups that sometimes you think, how the hell did these people become friends. As the story progresses, they all must band together to survive their ordeal. To be honest though, they don’t really do that, which is one of the twists that makes this interesting.

The plot has been done many times before. A group of people stranded on a supposedly haunted island with no chance of rescue and they must survive the night until they can be picked up the next morning. All sounds familiar doesn’t it? Well it is in some ways. But what Jeremy Bates has done with this one is introduce a series of twists in the plot that will have you wondering which direction it is going to go in next.

The writing in this one is simple. When I say simple I mean it’s not over complicated with a big elaborate back story with a lot of complicated history to the legend. It flips between the modern day story and a harrowing tale of the young girl in question set in the 50’s. The older scenes are fantastic and are what really make this book for me. They give you a very imaginative, and very emotional, look at what life was like in those times for people with certain disabilities. Its harrowing and, quite frankly, embarrassing at times.

As the story progresses, it will become very clear to you that although taking on the familiar slasher theme, this is anything but. There are a few fantastic twists in the story that will make you sit up in your seat. They will make you wonder what the hell is going on and they will give you goose bumps and make you shout “DON’T GO OUTSIDE!”.

The one constant in this is the extremely creepy and atmospheric backdrop of the island and its thousands of dolls. When you read these scenes, let your mind wander, soak up the sights and smells and sometimes sounds. Don’t read it on your Kindle in a dark room. You will find yourself checking under the bed.

All in all, I enjoyed this. It is a well written book and I will certainly be checking out Mr Bates earlier ones as well. Although it is a series, it looks like you can read them all as stand alone books.

Would I class it as full on horror though? In some ways yes: the creepy atmosphere, the psychological horror elements, the slasher type scenes. But to be honest? It’s more of a thriller to me. It could have been scarier and probably wouldn’t have scared me at all if not for the dolls.