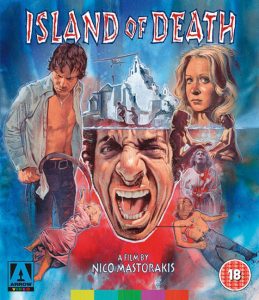 Banned on video between 1984 and 2011, Island of Death has gained a reputation as being one of the most shocking and violent films ever made. Filled with rape, incest, murder and bestiality, the film is certainly a transgressive one, even though the point of some of these scenes is often questionable. Nico Mastorakis, the writer and director of the film, has often stated that the only reason he made Island of Death was for money, and indeed, it’s hard to see it as anything more than an exploitation film. But Island of Death – with all its gratuitous sex and violence – does pose some interesting questions, particularly those that deal with a religious suspension of the ethical.

Christopher and Celia, masquerading as a married couple, arrive on the Greek island of Mykonos to commit a crime spree. Christopher, who describes himself as an avenging angel, aims to rid the island of all forms of sexual perversion, indiscriminately killing gay men, lesbians, adulterers and drug addicts. The irony, of course, is that he and Celia are the most perverse characters in the film. Within the first fifteen minutes, Christopher has already raped and killed a goat, and when both characters are molested at the end of the film, they both take pleasure in watching the other suffer.

The most interesting scene is the one in which Christopher and Celia attend a gay wedding. Though they are welcomed into the party with open arms, they have already decided to kill the couple, framing the murder as a crime of passion. Looming over the marriage bed, Christopher states that “God punishes perversion,” and that he is the “angel with the flaming sword.” He stabs one man to death whilst Celia forces the other to felate a gun before she shoots him in the mouth. Though we’ve already seen Christopher rape a goat at this point, his vehemence that his religious convictions make the murder justifiable is easily the most unnerving part of the film.

Similarly, Island of Death is also interesting in the fact that there are no protagonists; Christopher and Celia are, for all intents and purposes, the heroes of the film. When Celia is raped by two tourists, it’s almost impossible to feel sorry for her, even though the scene is painfully long and graphic. There are, therefore, some challenging questions thrown up around our reactions to violence – mainly, is violence okay when it’s happening to someone we don’t like, and if so, how does that make us, the audience, any different from Christopher justifying his crimes?

The film starts to lag soon after these scenes however, mainly because the main characters aren’t three-dimensional enough to carry the film. Celia cries and urges Christopher to stop killing before they get found out, but her reluctance to continue is entirely unconvincing, as she still contributes and derives pleasure from the following murders. In the same way, Mastorakis’ nihilistic world view makes the film a slightly exhausting one, particularly as there are no characters for us to invest in. 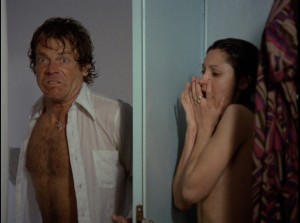 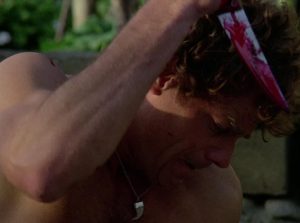 Probably the most memorable thing about the film is the soundtrack. Nick Lavranos’ score is delightfully trippy, adding a strange, exotic atmosphere to scenes that feel flat and dimensionless. It’s not particularly tense or atmospheric (and the less said about the original songs the better), but Lavranos’ percussion-heavy soundscapes often make the action on screen a little easier to stomach.

As a video nasty, Island of Death will be remembered alongside movies such as Cannibal Holocaust and Nekromantik, but unlike these films, Island of Death never has a great deal to say. Despite some half-baked ideas about religious extremism, most of the sex and violence happens for no other reason than to shock. Though fans of exploitation films will undoubtedly want to take the journey, Island of Death is – for the most part – a rather joyless destination.